Log in with Facebook
or
Wrong email address or username
Sign up
Already on BookLikes? Log in!
Incorrect verification code
Please, check your email, the code to access your BookLikes blog was sent to you already.
Enter code:
« Back Send
back to top
Search tags: wrathbone Jason Parent writes some the best horror stories, so there was never any doubt that I would want to read Wrathbone.

Soooo…let’s step into his world and get our scare on. 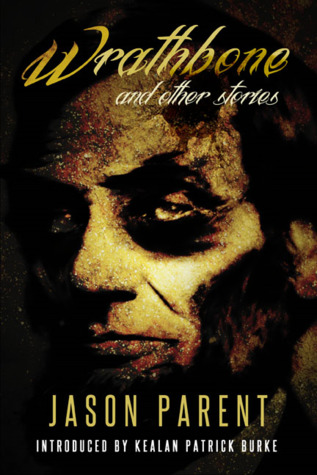 After reading Kealon Patrick Burke’s rousing recommendation and knowing from previous Jason Parent works, I’m eager to read this collection of short stories. The writing is  top notch, the evil ever present and the suspense…well you won’t forget these stories any time soon.

I will start with a review of the entire collection, and afterwords, give you a little taste of what’s to come.

I pictured the scenes as a movie unwinding in my mind’s eye, making me wonder, “How in the hell do you dream this stuff up, Jason?” Are you stoned on something?

Some of the horror is the subtle kind, others more blatant, but make no mistake, the terror takes the mind into insanity, and a thirst for blood.

One of the best horror anthologies I have ever read. Tension filled, upchucking moments, and I can’t believe I’m going to say this to you, but I couldn’t help but smile at a job well done.

5 Stars and a puke bucket please.

The titular story, Wrathbone, was a fantastically disturbing read. The unreliable narrator - was he crazy? wasn't he? - was used to the fullest advantage here. That narration combined with Parent's flair for describing mind-melting scenes of horror delivered pure awesomeness. Henry Rathbone was a figure I desperately wanted to save. I felt a surprising amount of pity for him rather quickly. I found myself actually hoping things would work out for the best for the family. (Which is unusual considering I'm normally happy to see lots of death.)

The Only Good Lawyer was one of those cases where you knew it was going to end with a serious comeuppance. And yet knowing that it was going to end a certain way did absolutely nothing to abolish my enjoyment of the read. In fact, Parent still managed to deliver a small surprise at the end of the story. I was so caught up in what I was reading that I'd forgotten a key point. I rather enjoyed it!

Dorian's Mirror was odd. I didn't like it as much as the previous two, but it had an appeal that I can't deny. Obviously a riff on The Picture of Dorian Gray, Dorian's Mirror is for the modern age. I think what draws me to it is the obsession with eyeballing the things we see wrong with us. It's hard to look away from a perceived fault. And although Parent carries it to extremes here, the root is the same.

For the Birds was my least favorite. There wasn't anything wrong with it, necessarily. But, given the quality the author delivered with the other three stories, it seemed a cheap shot. Possibly even filler. This was a story I'd expect from someone who relied far more on shock and gore tactics than true talent to get someone creeped out.

Revenge is a Dish finishes this collection of stories, and changes my opinion on the book overall. Reading Wrathbone I thought I was in for a pure horror treat. By the time I was done with Revenge is a Dish, I feel like I've just finished with a collection of Tales from the Crypt episodes. Pretty typical revenge story fare about a chef that got caught stuffing his sausage somewhere he shouldn't have and feels he's the wronged party.

Overall, the stories range between okay to awesome, with Wrathbone maybe setting the bar a bit too high. Jason Parent has the ability to do some truly wicked things with his mind. I hope he continues to cultivate his talent and doesn't take the easy roads for horror too much in the future.

Disclaimer: I received this book from the author for review consideration.

This is my second read of Jason's and this one is a short story collection. Without further ado, here we go:

The "title track" of this collection and it's an eerie display of watching a man sink deeper and deeper into madness. What makes this story even more unsettling is that it's based of true historical facts. Henry Rathbone was indeed a major in the Union army. He, and his wife Clara, were the guests of President Lincoln and his wife attending the play at the Ford theater where Lincoln was fatally shot. Rathbone did suffer from extreme guilt and eventually went mad from not being able to prevent the assassination of the president. This is Parent's imagining of what went on in Rathbone's mind after that fateful night. Impressive.

The Only Good Lawyer -

Bradley is a scum bag lawyer. A damn good one and he defends other scum bags for obscene amounts of money with no conscience hampering his ability to defend these lowlives. He gets a taste of his own medicine when a victim's father takes the stand. A fun ride that you know where it is leading, but still love the ride.

What if your looks were what made you a success and defined you? What if every mirror you now gazed in reflected you as hideous and aging more every time you looked into it? For Dorian, the mirror was his best friend. Now it is his enemy.

Nev's parrot has a peculiar craving. One warped story that is guaranteed to make you cringe!

Revenge is a Dish -

Maurice is hired to be a chef aboard a private yacht. Everything was going great until Maurice gets caught sampling the owner's wife's goodies. Oops. So what do you do with a guy when you're out in the middle of a vast ocean and days away from any land? Well, for Maurice, he gets tossed in the drink wearing nothing but his skivvies in shark infested waters. Needless to say, Maurice isn't in good mood after he's been floating on life ring for days fighting for his life. The only thing that keeps him going is his burning desire to enact revenge. Pass the salt, please.

Parent keeps getting better and better. There were 3 absolute gems out of this collection and, overall, there wasn't a clunker in the batch. That's saying a lot. His writing style is fluid and easy to read with an impressive vocabulary without being pretentious. I'm a reader and I read many books. It's been a month since I finished Wrathbone and these stories are still clearly tattooed in my brain. That's the sign of a good writer.

I just finished reading the last story in this collection and I am still having trouble finding words to describe just how much I am in awe of Wrathbone, the story that the collection is named after. I loved every single story in this book, but Wrathbone was by far my favorite. Jason Parent is an author that I have always liked but who I am ashamed to admit I have not read too much from--that is going to change.

Wrathbone: Beautiful, haunting, horrifying...1865. Abraham Lincoln was murdered. Is there a demon that Major Henry Rathbone is unable to stop, or is his haunting a reflection of his madness? Is a lifetime of torment enough or only a taste of what's to come? The writing alone would have had me but Parent has crafted a story to match and both are soul-achingly brilliant.

The Only Good Lawyer: An oxymoron? The epitome of lawyerly loathing, Bradley Walsh will stop at nothing to win a case. Without a bunch of pesky 'morals' getting in his way, there is nothing to lose, right?

Dorian's Mirror: Dorian loves nothing more than Dorian. Dorian's entire world centers around his looks. Putting most teenage girls to shame, Dorian himself is shameless and...flawless? Perhaps not... A quite satisfying spin on an old favorite.

Revenge is a Dish: Maurice gets to travel the world doing what he loves best, working as a chef and exercising his job 'perks'--at least until his boss finds out about his wife's private cooking lessons... cast out and with plenty of time to stew, Maurice plans his revenge and revenge isn't always sweet, sometimes it's salty...

An amazing collection, Wrathbone is one that you don't want to miss. Jason has accomplished in one story collection, one story in particular, what many authors will never do in their lifetime and as impressed as I am, I can't wait to see what else he has in store for us. I am in love with this book and will be paying a lot closer attention to Mr. Parent in the future.