Log in with Facebook
or
Wrong email address or username
Sign up
Already on BookLikes? Log in!
Incorrect verification code
Please, check your email, the code to access your BookLikes blog was sent to you already.
Enter code:
« Back Send
back to top
Search tags: Bees

Cute story of Beetrice who loves bees so much she becomes one. She learns what is like to be a bee and needs rescued. But who will rescue her?

I enjoyed this story. It is bright and colorful. It is fun. It is imaginative. I learned what it takes to be a bee. I loved how anything to do with b was emphasized.

My only complaint is the dialogue is written in red which on a Kindle is hard to read especially if you are older.

I look forward to reading more of this author. I got this as a free e-book from the University of Chicago Press - thank you! This is a weird, wacky book; historical fiction—with an emphasis on fiction— where true-to-life luminaries touch the peripheries of the lives of our main characters. As far as I can tell, there is only a tiny bit of truth regarding Gordon McKay here, and it comes only at the end of the story in a wrap-up. But honestly, who cares? This is a tale of westward migration with Geraldine Brooks' attention to detail and eye for quirky facts, along with the unnerving sexuality of an old VC Andrews story (If I say that a Sister and Brother - twins - figure into the plot, you'll know which one I mean.) I learned about bee-keeping, kiln making, and a bunch of other things I never would have googled until now; McMahon packed a lot into this slim volume, which is totally worth the time if you are up for an adventure. ​Best friends Lacey, Theo and Evita have their year planned out- do good in school, practice their music apply to Berklee and live together in Boston jamming together with their band.  However, things begin to change for Lacey.  Lacey's mom was a teenage mom, now a labor and delivery nurse who has always been upfront and direct with Lacey about sex, consent, protection and staying healthy.  Lacey has no experience with this herself, she has never even been kissed.  But when her senior seminar class begins to preach abstinence only education and being fearful or ashamed of sex, Lacey steps up in order to make sure her classmates are safe and protected, Lacey becomes a guru for sex questions and she, Theo and Evita help pass out condoms and other forms of protection to students.  The school is not appreciative of their efforts, however and suspends the trio for passing out lewd material.  In between all of this, Lacey and Theo realize that they have feelings for one another and begin to navigate a sexual relationship of their own.

The Birds, The Bees, and You and Me is a wonderful, sex-positive and health conscious story that is appropriate and informational for young adults while being entertaining.  I loved Lacey's character as well as her mom.  Even though Lacey was inexperienced, she held a wealth of knowledge thanks to her mother's open attitude and positive conversations.  Not everyone can have a mom like Lacey's though, which is why it is important for schools to teach about sexual health.  The reaction from the school was very surprising to me, it seemed to me that if they could turn a blind eye to all of the pregnant girls maybe they could do the same for a girl passing out condoms.  I do wish that Lacey, Evita and Theo would have worked with the adults more for their project instead of going rouge.  I do like how everything panned out in the end.  Another great aspect to the story was the friendship between Lacey, Theo and Evita.  Talking things out with friends is another step in healthy relationships and these guys had a lot of difficult conversations.  The straightforward conversations between Lacey and Theo about consent and sex are wonderful examples of how to start a sexual relationship.  In reading these conversations, they did seem a little awkward and uncomfortable to me, but I also think that is the reality of the situation.  Lacey and Theo's budding romance as well as their band add to the excitement of this fun and realistic young adult novel.

Eusociality, from Greek εὖ eu "good", is the highest level of organization of animal sociality, found in bees and ants, and include care of offspring from society, or a division of work into reproductive and non-reproductive tasks. This division of labor within the animal world our biologists call “castes”. An interesting behavior characteristics of caste members is that a member of one caste loses the ability to perform the task of another. 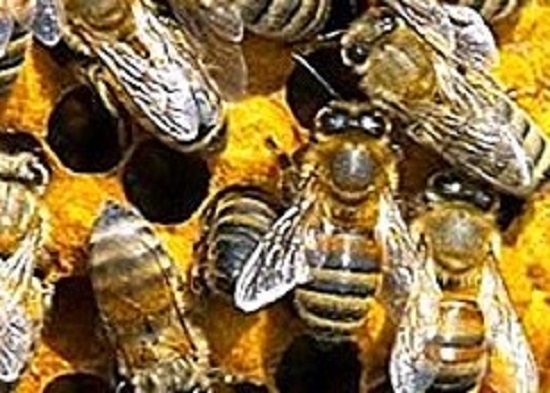 Honey bees, super sisters’ bees and their Eusociality has developed over the 1,000s of years of evolution and has always fascinated people with its efficiency and complexities. In haplodiploid species, bees included, females develop from fertilized eggs and males from unfertilized ones. A queen only mates during one brief period in her early life, over the course of a small number of mating flights. About 10-20 drones (males) will mate with the queen during her mating flights. I liked this book about bees, but I should point out that I know basically nothing about bees so all of the information that was new to me in this book may be old hat to those of you who actually have an interest in them. I suspect that if you've been inclined to open more scholarly tomes about bees you won't find much of interest here. This is definitely not a scholarly tome.

At first I thought that this book would escape my criticism of what passes for general science books, but although it does much, much better than some of the books that have inspired one- and two-star rants from me, it still reads more like a series of magazine articles, complete with descriptions of people like:

With tanned features and a perpetual, blue-eye squint, he certainly looked like someone very much at home in the desert.

Wearing a floppy sun-hat and tinted glasses, with his snow-white beard cropped short, he looked something like Santa Claus on vacation—assuming the old elf spent his off-season in California doing a lot of hiking.

Sometimes descriptions like these work, but they started standing out to me more and more once I realized he did it all the time. And there are a lot of people who get introduced to the reader. Really, I'd say that this book is more about the people who work to study and use bees than the bees themselves.

Sometimes the humour works well, like in the update I posted, and sometimes it falls flat, like when the origin of the phrase Doh! is discussed on page 105:

The Oxford English Dictionary traces the origin of the expression "Duh!" to a Merry Melodies cartoon from 1943. The similar time "Doh!"—popularized by Homer Simpson—got its start on a BBC radio program a few years later. Either phrase would have been appropriate for me in that forehead-slapping moment.

Just a lot of filler, really. I'd also count many of the author's asides with his son as unnecessary filler. If you do decide to read this book, be prepared to be a subjected to a series of Noah's bee-capades as he grows up. They're related to bees and what is discussed in what I'd consider the "main" text, but the way they're presented makes them feel like they're being used to flesh out a rather thin volume on bee facts—and this isn't a long book. For that reason, I'm nominating this book for Task 3 for Door 9 (Thanksgiving): Name a book you’ve read this year that you thought was full of “stuffing”.

Oh, and at one point, to illustrate how dependent humans are on bees for helping to pollinate our food, the author describes how he got up early to be able to go to McDonalds to order a Big Mac for lunch but disassemble and dissect it to take out anything whose production may have been helped by bees. He actually took a picture of the result, but I was left wondering, why ruin your lunch when you could just use the burger as a point of discussion? Admittedly, I was also wondering who still went to McDonalds in 2018, since that also seemed somewhat odd.

35 of 216 pages (asking an ornithologist about chickens)