Log in with Facebook
or
Wrong email address or username
Sign up
Already on BookLikes? Log in!
Incorrect verification code
Please, check your email, the code to access your BookLikes blog was sent to you already.
Enter code:
« Back Send
back to top
Search tags: Belle-Whittington

If you are in Houston, TX on Saturday, 01/11/14, and are a fan of romances with biker dudes & chicks you may want to check this out. 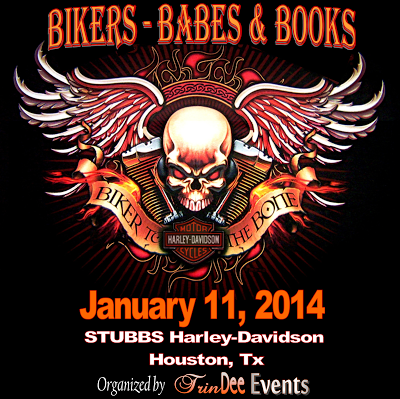 BIKERS-BABES & BOOKS is a themed book signing taking place at STUBBSHARLEY-DAVIDSON in Houston Texas. This event will feature multiple authors whose books are biker themed or have a main character who rides a motorcycle.

More info can be found at: http://tdevents.blogspot.com/p/bikers-babes-books.html

Firefly makes an excellent sequel to Cicada. I was instantly sucked into this book from page one. It took a few days for me to finish reading, but I was always reluctant to put it down every time. This series is just so different from most of the sci-fi books that I have read.

Blair really develops through this book as she starts to turn into something that isn't human. Blair just feels like a real character even though she isn't really human. She could get annoying some times, but it's understandable. She has a really realistic reaction to everything happening to her.

Then there is Everett, who I now adore even more, if that's possible. He is just adorable and I wish he was in the story even more. I love the relationship that he shares with Blair. There was also a new character, Ash. He was definitely a really interesting character to get to know.

The plot moves along really well from the very beginning. A lot happens in this book and after I finished it, I needed some time to let it all sink in. I wasn't sure where Whittington was going to take this story next, but it definitely took me by surprise. There is action and suspense that kept me interested in knowing what would happen next.

I think I may have enjoyed this one even more than Cicada. I'm really looking forward to the next book in this series now, especially after that ending. Overall, I strongly recommend Firefly, it was a great sequel. Cicada's synopsis was very intriguing. I love books that are about uncovering a secret and also about a group of friends banding together for a cause or goal, so I was pretty excited for Cicada. However while the beginning was enjoyable, I have to say the book dragged a lot. Also the ending was out of the blue and I felt it was a bit too rushed. However, Cicada was enjoyable, it had the potential to be more but in the end it was an enjoyable read.

The beginning of the book felt like it was going to be a summer fun read, especially with the group of friends graduating, the happy, summery feel you get when you are having the time of your life. However then a UFO sighting turns their life upside down and they try to find out what they just saw. The chase to finding the truth began. I personally thought this part took way too long. Almost half of the book was of them trying to find out WHAT they just witnessed, and even till the end, there were so many unanswered questions. I just didn't really enjoy how there was so much build up to what is out there but then we get a simplified explanation and a sad farewell to the graduates and a very confused me. I just hoped the complication was resolved in a better way and in a more interesting and just gave justice to all the chase and anticipation that have been building up through the book. Also, lately I've started having issues with protagonists finding out they are in love with their best friend in the last couple of chapters, and unfortunately this happened in Cicada. I had a feeling it was going in that direction, but I prayed that it wouldn't. So I really did not enjoy the romance.

All in all, while Cicada had a lot of pacing and plot issues, the actual story is intriguing and I really want to know WHAT happens next and who these creatures and people are. I hope the next book in the series has more plot and character development to make it more enjoyable.
Like Reblog Comment

Blair is spending one last summer with her older brother and his friends before they all run off to college and their future, leaving her behind to finish senior year all by herself. But the day after graduation changes everything. After inspecting a crop circle on her grandfather's land, a mysterious flying object comes up and injects a creature from it. The series of events that happen next will forever change the lives of this one group of friends. No longer a carefree summer, but a summer spent figuring out who they are and how to keep each other alive.

Loved this book!! It was so suspenseful that I had gripped my nook so hard I thought I would break it. I always enjoy a good romance and this one really delivered at the end. I liked how the relationship grew from a strong friendship into something real. I saw it coming, but was pleasantly surprised with how it all went down. With too many books now days the romance is 'BAM! You’re in love' without laying eyes on someone.

Cicada is a fast paced read that will keep you at the edge of your seat. With so many questions in need of answers, you will eagerly be waiting for the next book Firefly.