Log in with Facebook
or
Wrong email address or username
Sign up
Already on BookLikes? Log in!
Incorrect verification code
Please, check your email, the code to access your BookLikes blog was sent to you already.
Enter code:
« Back Send
back to top
Search tags: Berkeley-Breathed 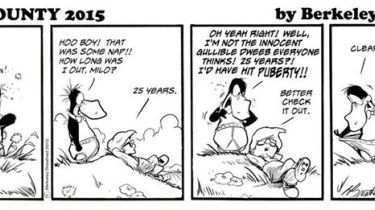 I would like to thank NetGalley and IDW Publishing for providing me a copy of this book in exchange for an honest review.

Now, I will admit that I had never read the “Bloom County” comics before, even though I had heard of the series way back in the 1990s. I guess it was because that by the time I started reading newspaper comics, “Bloom County” had all but vanished from the strips and I was not able to read the series then. So, imagine my surprise when I found out that a) the author of the “Bloom County” comics Berkeley Breathed, had decided to bring this comic series back to the pages in his newest comic book called “Bloom County Episode XI: A New Hope” and b) NetGalley has given out this book for readers to check out!

After twenty-five years of the “Bloom County” comic strips going out of the pages, the Bloom County gang has finally come back with new adventures and are trying to get used to all the new technology, such as social media and dealing with all the political drama in this modern-day world!

Berkeley Breathed’s writing: Wow! I never would have thought that there would be a day where I would actually read Berkeley Breathed’s legendary comic strip “Bloom County” and now that day has finally come! Berkeley Breathed has done a brilliant job at writing this comic book series as the humor is sharp and witty and I really enjoyed the way that the satire on the modern-day era is handled in this series as I found myself laughing at each jab at the current state of politics. Now, I will admit that I do not normally read many books or comic books that deal with politics because most of them tend to be a bit too one-sided for my tastes. However, Berkeley Breathed was able to make the political satires in this comic be more hilarious and memorable as it managed to poke fun at both liberals and conservatives and that really amused me! I really liked the fact that the comic is written in a way where you do not have to read the previous “Bloom County” comics to get the characters or the setting. The fact that the characters felt the same way as they did decades ago except for the fact that society has changed over time, really made reading this comic a pleasant experience for me! I also loved the way that Berkeley Breathed wrote each character, especially Bill the Cat and Steve Dallas as all the characters were hilarious and entertaining to read and I especially enjoyed their interactions with each other, especially with how Steve usually acts like a jerk towards the other characters, but is still on friendly terms with them. 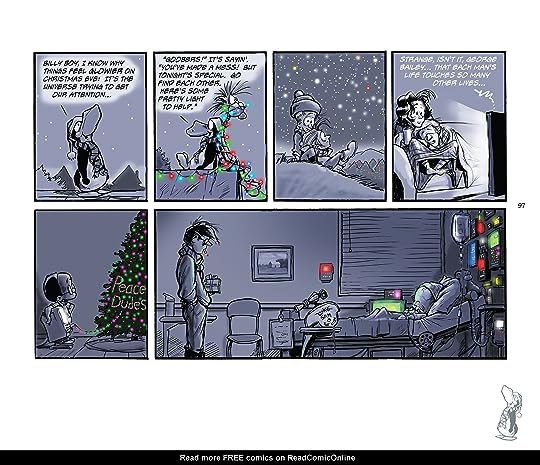 For anyone who does not like language and sexual dialogue, this comic strip does have some language such as the constant usage of the “a” word and also there are some sexual dialogue littered throughout the comic, mainly coming from Steve Dallas himself as most of his story arcs involve him trying to get a date with various women. This last week I've been knocked out with a cold - the kind a lot of people would call the 'flu, but is just really a bad, bad cold.  The type where you either sleep or just lie there staring listlessly into space because watching tv or listening to audio hurts your ears, and your eyes don't want to focus on anything, and never mind your brain; your brain is too focused on trying to figure out why it feels like you've just swallowed razor blades, and trying not think about anything else at all.

So when I finally started feeling vaguely human yesterday I needed comfort and ease, and a reason to laugh.  I needed Judy Blume and Berkeley Breathed.  All of these I've read before, but all of them survived the reunion.

Otherwise Known as Sheila the Great - Judy Blume:  Well, ok, I hadn't read this one since I was a kid and remembered it as less than a favorite.  I remembered correctly as it's the Blume book I like the least (relatively speaking, b/c everything she wrote for kids is brilliant).  Sheila had a problem with honesty and even as a kid I did not care for the way she fabricated lies to prop up her ego.  Blume tries to show the reader Sheila does this out of fear, but it never really engaged my sympathy, although Blume might have been writing about me in the scene involving the swimming test.  Still, 3 stars.

Freckle Juice - Judy Blume:  I've always thought this book was great.  Definitely written for the younger kids; the gross factor is high and the storyline simple and straight forward, though I particularly enjoy the tiny twist at the end more so as an adult.

Deenie - Judy Blume The Blume book I found Most Confronting as a teen, and still found painful to read.  Scoliosis terrified me growing up and this book did not help matters.  My later diagnosis sent me into paroxysms of hysteria, even though mine is so mild it wasn't worth treating.  Decades later, this book is still hard to read, but what stands out the most is this is one of the rare Judy Blume books that feature active parental interference.  In a note at the end of this edition, Blume acknowledges this, saying she wrote Deenie as a way to explore how parental expectations can shape and pigeonhole children.

Bloom County Episode XI: A New Hope - Berkeley Breathed and Bloom County: Best Read On The Throne - Berkeley Breathed:  Bloom County is one of those things that you either get or you don't.  It shaped my teen aged years in ways I cannot adequately explain and Breathed's comeback in 2015 felt like a cherished part of my life had been returned to me; to stick with comic strip metaphors, it's like Linus getting his blanket back.  And the blanket has a hilarious sense of humor. My favourite fiction reads of 2016 were probably as varied as they've been been.  While once I was a tried and true mystery-or-bust sort of gal, my favourites this year only include 2 mysteries, both historical.  2 were popular fiction, something I almost never read; 1 an almost forgotten classic re-released, 1 Urban Fantasy and 1 collection of comics from my personal comic hero, Berkeley Breathed.

I had a lot fewer 5 star, books-I-want-to-hug in fiction but I had a lot more 4.5 star fiction reads this year.  It's been a great year for me reading-wise: while admittedly generous with my ratings, I rarely rate much 4.5 or 5 stars; I usually top out at 4 (something I'd re-read but not gush about).

Christmas at The Mysterious Bookshop

A Bed of Scorpions

The Curse of Tenth Grave

The Semester of Our Discontent

The Other Side of Midnight

The House at the End of Hope Street

My first love, mysteries, make a very strong showing in the 4.5 star list.  Lots of cozies, of course, and historicals, and lots of UF, but a couple of classics and some great literature are on this list too as well as some YA and a sneaky contemporary fiction.

Overall, I'd incredibly pleased with my reading this year; I broke my personal record for most books read, yes, but I'm even more thrilled with how much broader my reading has become.  I even read a Science Fiction book this year!  *gasp*.  (I still don't like SF.)  This is 100% because of this community.  I've said it before, but it bears repeating:  I owe my TBR mountain range entirely to this community.  Without all of you I'd still be reading all cozies, all the time.  So thank you, and keep 'em coming! I love love love this book!!  Fannie Fudwupper tells the rhyming story about her fibbing brother, Edwurd, and how he tells one fib so big that it spins out of control.... and into outer space!  This book would be a great read for any 3rd or 4th grader, and a great read-aloud book for 1st and 2nd grades.  I would include this book in my classroom library for students to choose and read, and I would read this book aloud to the whole class.  Students with siblings would definitely relate to the story, and learn the value of sibling relationships even if they don't always get along.  This book works well by itself just to entertain students.  I would also use the book to supplement character education, socialization, and cause and effect.  The book would aid in teaching honesty, how students should treat others even if they don't get along, and the gravity of their actions.

It's Bloom County:  you either get the humour or you don't.  I've been a huge fan of Breathed's work since the 80's and when he quit if felt like a friend died.  His come-back has been a driving force behind my putting up with Facebook's daily crap and most days the only reason I open FB at all.

Episode XI:  A New Hope is a collection of the new FB only strips and they are wonderful.  I rarely never laugh out loud the way I do when one of Breathed's strips hits me just right.  I howled at a few of these and conversely, there were a couple of strips that teared me up.

Breathed is a genius at holding up a mirror for all of us and allows me to laugh at the stuff that normally makes me want to hide under my bed.

Strip used strictly for the purposes of this review as outlined in the copyright page of the book - please do not re-distribute.