Log in with Facebook
or
Wrong email address or username
Sign up
Already on BookLikes? Log in!
Incorrect verification code
Please, check your email, the code to access your BookLikes blog was sent to you already.
Enter code:
« Back Send
back to top
Search tags: cats 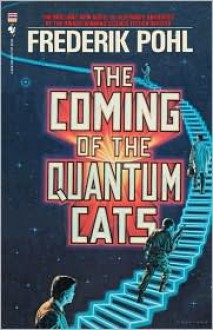 Dominic "Nicky" DeSota is a Chicago mortgage broker in trouble. Arrested by the FBI, he is accused of breaking into a nearby government lab — only at the time, DeSota was on a weekend trip to New York City. This isn't good enough, however, for a moralistic and oppressive federal government, because if it wasn't DeSota, who else could it have been?

Dominic DeSota is a United States senator enjoying a romantic night with the world-renowned violinist with whom he is having an affair when he is asked to fly to a military research lab in Sandia, New Mexico. When he arrives he learns that the military police have Dominic DeSota in custody, a man who is the senator's exact double. Under interrogation, the captive DeSota provides only cryptic answers — just before vanishing right before them.

Dominic DeSota is a United States Army major who has been assigned to an assault team invading another world. Their mission is part of a larger plan designed to use the newfound ability to cross over onto parallel Earths to defeat the Soviet Union and win the Cold War. This plan begins to fall apart, though, when the America they invade proves less than cooperative. And then there is the growing problem of ballistic recoil . . .

Frederick Pohl was one of the grand masters of science fiction's Golden Age. During a career that spanned over seventy years he wrote or co-wrote nearly five dozen novels, some of which endure as classics of the genre. This book is not regarded as one of his best works, in part because of its focus on a particular time and place. Set in the then-contemporary world of 1983, the novel follows the different incarnations of three characters as they discover the existence of their counterparts. As their worlds come into conflict with one another, these characters confront their alternate selves and ponder the differences suddenly before them.

While Pohl uses his premise to address the allure of the life unlived and the degree to which we are defined by the world around us, his main interest is on commenting on the growing conflict between the various Americas he describes. For the most part these worlds are satirical takes on the America of his time, consisting of a police state run by religious fundamentalists, a thinly-veiled military dictatorship, and a complacent self-obsessed superpower. What makes Pohl's novel stand out from similar works of its type is in how he presents these worlds, not by scattering extended infodumps in his text but through the differences between the characters from them. By showing how the lives of Dominic DeSota, Nyla Christophe, and Larry Douglas differed because of their circumstances, he provides a work of alternate history that is among the best of its type. This is why, for all of its datedness, it is still a novel that is very much worth reading.

I just stopped to look at the book description again, because what's currently happening doesn't quite match what I recalled from the description. Whoever wrote that must have been working off an earlier draft of the book or something, because it's way off base on one key aspect. It says that Charlie's girlfriend, Helen Louise, ends up suspected of murder because several party guests overheard her having a loud argument with the victim. In reality, it was the local pharmacist's insanely jealous wife who had the loud argument, and she hasn't yet been brought up as a major suspect because her husband dragged her home well before the murder happened.

No one's been murdered yet, but we do have some mysterious kittens dropped off by someone the main character, Charlie, thinks is probably a frightened child, and a new neighbor who insists that she has a long history in the area but who no one seems to know anything about or even fully remember (one person thinks she looks somewhat familiar, but that's it). There have been several scenes of Diesel acting as the kittens' adorable babysitter, letting Charlie know when the tiny idiots were doing something that might get them hurt.

Surprise, I'm listening to something new. This one's a bit risky: Book 10 of a series where I've only read Book 1 before. But in my experience, although you miss out on the development of character relationships, it's generally okay to read cozy mysteries out of order.

I'm really surprised that the narrator is female, considering that the book is a first person male POV. 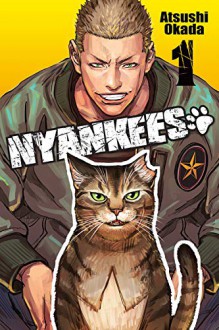 This series stars a bunch of stray cats who are usually depicted as tough human thugs and gang members. Ryuusei is a newcomer in Nekonaki, the territory ruled by Taiga and his gang. He doesn't always think before getting into fights, but he's tough and has the scars to prove it. Taiga and the others think he might be looking to steal some territory, but in reality the only thing he's interested in is finding a mysterious calico tom with a scarred eye. There's a chance that the cat Ryuusei wants to find is the new leader of the Goblin Cat Tails, but in order to meet him he'll first have to fight his way through a bunch of cats trying to create a cat utopia.

The main reason I got this was because of the cats. And also, the "cats depicted as people" aspect reminded me a little of Hatoful Boyfriend (although I suppose that was "birds briefly depicted as people"). Based on what I've seen of the cat politics around my apartment building, depicting cats as thugs duking it out for pieces of territory seemed like something that would work well.

The art was decent: nice clean lines, cats that were usually drawn well (the legs were occasionally weird), and easy-to-follow action. I liked the way Okada worked aspects of each cats' fur pattern into their clothing design. For example, Taiga, an orange tabby, wore a jacket with tabby stripes on it. Design-wise, Madara was my favorite, both in his human and cat versions. As a cat, he was a tortoiseshell (which would probably be hell to draw consistently if Madara became a regular character). In his human form, his tortoiseshell pattern became a coat with a camo pattern.

The humor was so-so. A few crass moments, like when Ryuusei tried to hit on Mii, or when a panel focused on Ryuusei's jiggling feline balls (so many cat testicles in this). There was also the bit with Ryuusei and the box. Honestly, it's amazing he's survived this long.

The whole "cats depicted as people" thing seemed a little inconsistent. It wasn't quite that these were cats sometimes shown as people but still 100% cats - Okada occasionally drew them in poses that weren't natural for cats but were natural for their human depictions. But behavior-wise, they also weren't just cats with people's minds. It was a bit weird.

Unfortunately, the characters and story didn't capture my attention at all. The characters did a lot of shouting and posturing but didn't otherwise stand out much. The one moment Ryuusei really stood out, for example, was when he demonstrated a willingness to show his belly to humans in order to charm them into giving him food. Otherwise, though, he was mostly Main Tough Guy Who Shouts a Lot and Is Occasionally Silly. Taiga was Leader Tough Guy Who Shouts a Lot. Then there was Kinbi and Ginbi, aka Tough Villain Guys With Dreadlocks Who Shout a Lot. And Mii was The Girl. I assume this world has more than one female cat in it, but you wouldn't know it from what you saw in this volume. I liked that it was noted that the volume's male calico and tortoiseshell were both rare, but it would have been nice to see more female characters.

It was a little confusing, but it sounded like the male calico Ryuusei was looking for was maybe someone he looked up to at some point. Other than that, I have no idea why finding this particular cat was so important to him. I also don't know that I care enough to buy any more of this, although there's a possibility I might check out a library copy of the next volume one day.

A page of translator's notes, which for some reason is included just before the final chapter in the volume, and a couple full-color illustrations.