Log in with Facebook
or
Wrong email address or username
Sign up
Already on BookLikes? Log in!
Incorrect verification code
Please, check your email, the code to access your BookLikes blog was sent to you already.
Enter code:
« Back Send
back to top
Search tags: funny-pages Another enjoyable couple years for the Peanuts gang. Charlie Brown gets "Eraserphagia" and "Little Leaguers Elbow", Lucy discovers Rachel Carson, Linus gets stage fright at the Christmas pageant, and Snoopy has bird problems. Many plot points for the soon-to-be-produced "Charlie Brown Christmas" special were pulled from these years as well.

The only really odd, unique thing about this volume was the introduction of '5' and his sisters '3' and '4'. They were renamed by their father because of the country's new mania for zip codes. 5's full name is 555 95472. It makes sense that the gang are Californians.

The rest of the strips are engaging and funny, of course, Schultz didn't need to reinvent the wheel to get laughs. My favorite strips were when Lucy and Frieda are commenting on the baseball game and how they might even win, and they ask each other if they even like baseball, and then Charlie Brown's finally one-upping Violet by pointing out that his father doesn't have to be the best bowler, because his dad loves him and that's enough. D'awww.

These are still a great investment, beautifully packaged and the end-papers keep getting better.

And, because Linus is on the cover - here's my Hungerford Vinyl Linus doll from ~1961, he's missing his blanket, but he's great and I'll keep my eyes out for the rest of the set: there's a Charlie Brown, Lucy, Snoopy, baby Schroeder (with detached piano) and Sally and Pigpen. 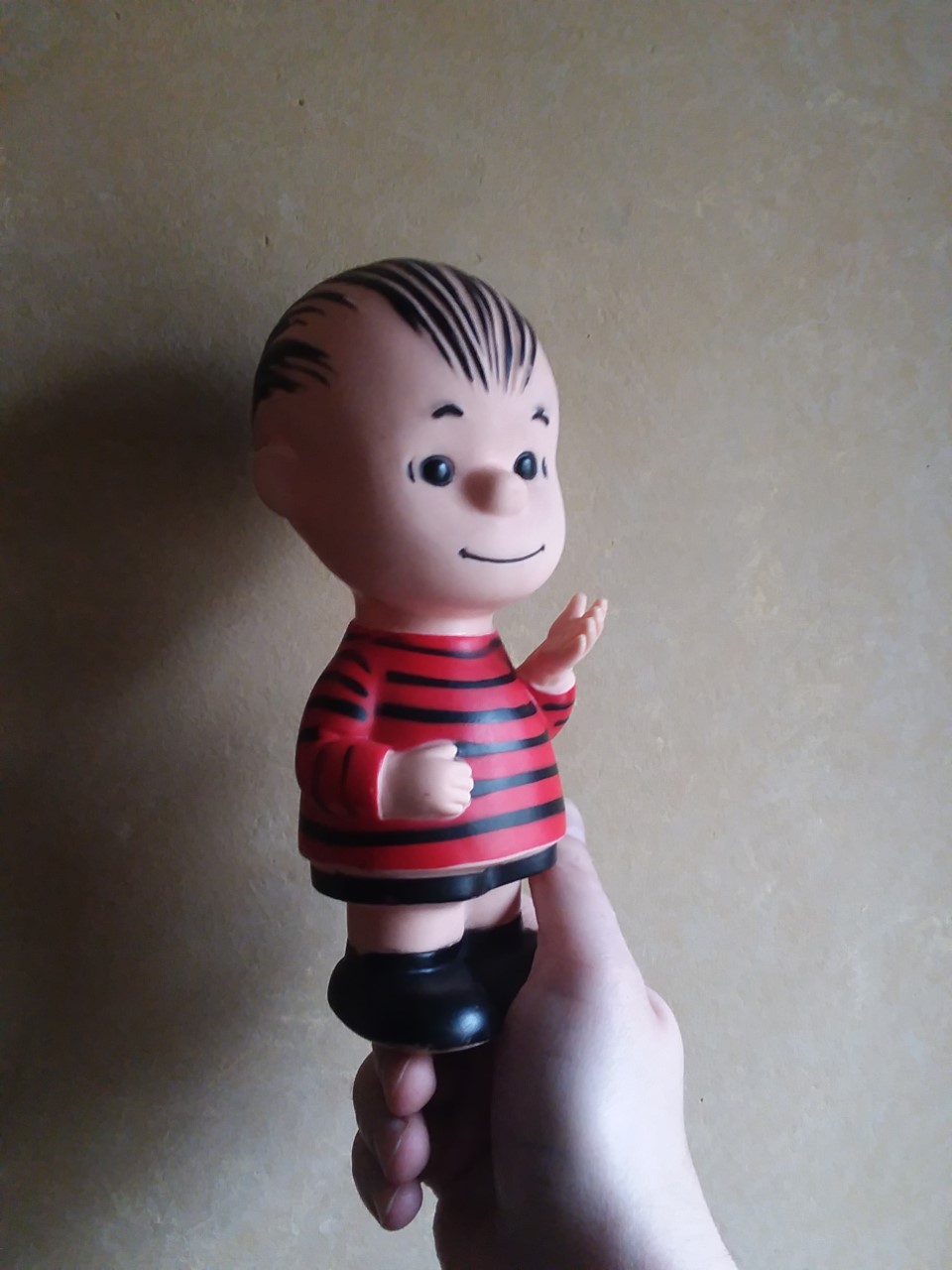 '8-Bit Theater' is a sprite comic (a comic using video game 'sprites' as characters instead of unique creations) based off of the original 1987 'Final Fantasy' video game for Nintendo. It follows Black Mage, Fighter, Thief and Red Mage (helped along by the exasperated White Mage) as they trade-in on orbs 'lukewarm' with destiny to get in on a quest to become Light Warriors and defeat Chaos.

This was, in my opinion, the King of Sprite Comics, which, is not a whole lot of praise to be honest. Sprite comics are looked down upon in world of web comics as lacking in artistry and being plagued with lazy jokes and storytelling. I mean, this is true, but '8-Bit Theater' was a lot of fun and I ended up following it all through high school. I was pleased to discover before graduating college that it had been given a conclusion. There were so many of these comics back in the day that I used to follow, and I'm sure there are many more out there, but I don't think any of them reached the scare-quoted 'stature' and longevity that '8-Bit Theater' enjoyed.

In total, '8-Bit Theater' was made up of 1,224 comics, a drawn epilogue, and dozens of guest/holiday comic one-offs. Brian Clevinger has made several other comics that have been given actual acclaim, but this is the only one I really loved.

Now, since a stray comment reminded me of the 'armoire of invincibility' joke, I ended up re-reading the whole series. A lot has changed for me since the high school computer lab. The comics are rife with dated, classic 'nerd' sexism and mild homophobia - nothing truly toxic, after all, White Mage and Princess Sara are among the smartest characters in the series, but still it effected my enjoyment. Clevinger also used a lot of wordy, rambling humor that made many strips an exercise in patience as Red Mage or Fighter babbled on for eight panels to end in yet another face-palm sigh of exasperation from Black Mage.

'8-Bit Theater' in its ~8 years of publication created a rich world of insider jokes and was my first introduction into the many tropes of gaming and fantasy in general. This was a great experience and got me to play my first video game in almost a decade. I'd never played the first Final Fantasy and borrowed the upgraded edition of the game on PSP from a friend. So, an old time-waster inspired me to give up a whole weekend on a thirty year old video game. Fun!

But, whatever, its still pretty damn funny. It also helped that it brought back some great memories of laughing at these panels with my friends clustered around the same monitor in the computer lab. "Ye be facin' THE CLAW!" If we'd had smart phones back then, I don't know if we would have gotten anything done in high school. In these years Sally becomes a full-fledged character, aging in time to fret about the tyranny of being sent to Kindergarten. The biggest debut is Frieda & Faron. Growing up I had no idea who Frieda was because she had the briefest lifespan of Schulz' main characters so hardly appeared in any strips after I was born. She and the other forgotten characters did appear in my hand-me-down  'Charlie Brown Dictionary' set, but that doesn't give much in the way of characterization.

The span of this comic staggers me if I really think about it. He kept up a daily strip with relatively few repeats for fifty years.

Otherwise, there is being to be a lot more interaction between Snoopy and the birds, he talks with them, allows them to rent out his doghouse for club meetings and is a rest stop during migration. Woodstock, of course, is a few years way. My favorite strips were where he befriends snowmen, only to have them melt.

Lucy's psychiatric booth gets into full swing and there was an interesting storyline where the Van Pelt's new tangerine pool table causes unrest among the mothers. They spend so much time playing during the day they forget about their children. In these years Schulz really gains a lot of confidence and the experimental tweaking of gags and characters begin to truly pay off. There are some great debuts in this collection, but the craftsmanship of the strips is evident even in the strips that, at first glance, could have appeared in any of his late '50s strips.

I love sharing my favorite strips, but its a little labor intensive, so from now on I'll skip it unless the spirit moves me. (le sigh).

Debuts! I can't believe it took over eight years for Schulz to give Lucy her Psychiatric Help booth (the rate was 5 cents even then)! Linus simply can't get a break, on top of Snoopy's continued depredation, his grandmother confiscates his blanket for the first time, and he has his faith tested by the Great Pumpkin.

Of course, the biggest change is the introduction of Sally. We hear about her being born and, much like toddler Lucy and baby Linus, quickly grows up.

The original Patty doesn't get much love, even though she was one of the original three Peanuts characters. I remember reading a reference that Schulz got tired of drawing her tartan dress. I'm glad she got the cover at least once. An issue of 'Tales From the Crypt' was one of the few comic books lying around my house growing up. It was sick, it was gruesome, and I read it all the time. I was never sure where it came from and my parents refused to get us any more, but it stayed with me. I remember my siblings and I loved to watch the cartoon on Saturday mornings and later watched the TV show and movie.

These are just as fun to read now as when I was a kid. Even with the overuse of exclamation marks - literally there's one at the end of every sentence even on the most mundane of statements! These stories have vengeful corpes, premonitions of death, voodoo dolls, curses - you name it! The vibrant colors on these reissues makes them really pop. I can see why my parents raised their eyebrows at this stuff in the early 90s, so yeah, this was controversial in the 1950s and led to some pretty heavy restrictions on the industry.