Log in with Facebook
or
Wrong email address or username
Sign up
Already on BookLikes? Log in!
Incorrect verification code
Please, check your email, the code to access your BookLikes blog was sent to you already.
Enter code:
« Back Send
back to top
Search tags: ladybug Mr. and Mrs. Horse want a colt. Finally a baby comes but it is a ladybug. They have no idea how to care for a ladybug so they go to the doctor who explains the difference between horses and ladybugs. The horses are sad but their little ladybug tells them it is okay. When they realize he is right, they enjoy life with him.

This is adorable. The drawings are perfect for the story. I liked the horses and how they took care to learn about the ladybug. They shed tears when they realized what they expected was not what they got but then they saw the bright side and turned their tears to smiles and living.

At the end of the book is the story that was the inspiration for this book. It is beautiful and is shown through the story. The Grouchy Ladybug is a beautiful story! It follows the day of a very grouchy ladybug that wants to fight with EVERYONE. I think that students will definitely relate to that feeling. The illustrations that accompany the text draws young readers in and sparks their interest. There are several pages of various sizes; I think that this gives the book an interactive feel for younger readers. I can see myself using this book in so many ways in my classroom! I would love to incorporate this into a science unit about ladybugs. I think it would be fun to order a ladybug habitat and allow the students to study the life cycle of the ladybug. Because this book is largely about grumpiness and aggression, I would ask my students to write about a time when they might have felt this way and ask them how they overcame it! I would also construct a sequencing center activity to accompany this title. 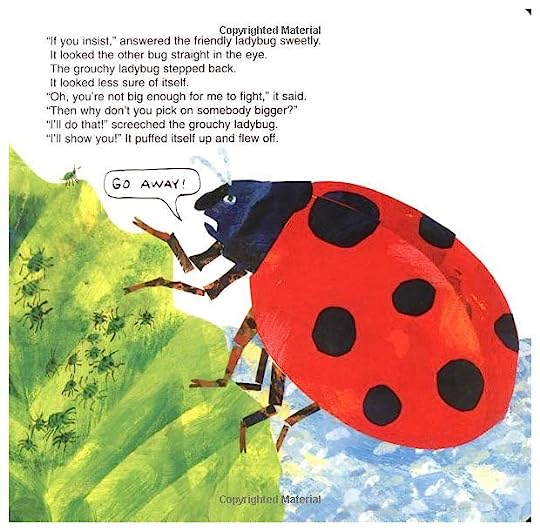 What animal does the grouchy ladybug meet up with the end?

Read the book to find out!

Seriously, this is one creative and hilarious book from the great mind of Eric Carle and both the story and the illustrations contribute greatly to this cautionary tale about bullying. Eric Carle makes this story extremely as the grouchy ladybug is shown as your average bully as he bullies the other animals into trying to fight with it and I loved the way that the grouchy ladybug encounters one large animal and then moves on to a larger animal than the last and what was so hilarious about this was how the grouchy ladybug always stated whenever it meets an animal larger than itself:

And that statement always makes me laugh because I always wondered about why the ladybug would want to pick a fight with someone who is much bigger than it is. It was also hilarious that the moment that the ladybug notices the larger animal’s special ability to defend itself, such as the skunk using its stink and the sparrow having a sharp beak, the grouchy ladybug just immediately runs off to find another animal. Eric Carle’s illustrations are simply beautiful and creative as the images are extremely colorful and keep the story running smoothly. The images that really stood out the most for me were the images of the grouchy ladybug itself as it always has a grouchy look on its face and looks so small when it flies up against the larger animals. My most favorite part of this book was whenever the grouchy ladybug meets the larger animals, the pages are sort of cut up to indicate each animal the ladybug passes and the larger the animal is, the longer the pages are. I also loved the way that there are clocks displayed at the top of the pages of each animal the ladybug meets as it indicates the time that the ladybug shows up to meet up with the animals.

Overall, “The Grouchy Ladybug” is a truly hilarious book that teaches a thing or two about the consequences of being a bully and any child who is a huge fan of Eric Carle’s will definitely get a kick out of this book. I would recommend this book to children ages four and up since there is nothing inappropriate in this book.

The Grouchy Ladybug by Eric Carle is a fun and interactive story about a ladybug who keeps trying to fight bigger animals until he gets to a whale that slaps him with his tale back to the original ladybug he was talking to. This is a great book to show growth and sequencing because the page gets bigger each time until it comes up to the whale and it takes up the whole page! I think that children will also love the colors and animals that are found throughout the illustrations in the book. I would use this book in younger classes, but if I were to use it in my classroom I would do an activity with sequencing and play a game where the students have to put the animals in order. This activity would also correlate with size since the animals get larger throughout the story.

Eric Carle tells another valuable story with stunning illustrations in The Grouchy Ladybug.  We are told the story of a grouchy ladybug that challenges creatures much larger in size.  Kindergarteners and 2nd graders will be delighted with this book.  This book would help teach size relations, as well as social relationships and moods.  I would definitely use his book as a read aloud and have students refer to pages in the book when introducing differences in size.