Log in with Facebook
or
Wrong email address or username
Sign up
Already on BookLikes? Log in!
Incorrect verification code
Please, check your email, the code to access your BookLikes blog was sent to you already.
Enter code:
« Back Send
back to top
Search tags: wildstone Tilly was the BFF of Dylan. When they grew up he left without a good bye to join the military. Tilly went on without him but 10 years later he is back and wants to get back together with her. Tilly is mad and tries to avoid him which is difficult since he is in her class. How will she keep her distance from him when she still feels the same pull?

I enjoyed this story. It is short but a lot happens. I liked Tilly and Dylan of today and yesterday. Both want to protect the other. I enjoyed how the class was on Dylan's side. I also liked how people tried not to take sides but eventually Dylan's past story comes out. His friends are a hoot. Her sister is a riot. I loved the story and the characters. This is book #5 in the Wildstone series.  This book can be read as a standalone novel.  For reader enjoyment, and to understand the series, I recommend reading this series in order.

Brynn comes home after another boyfriend makes her feel less than herself.  The bright spot in her life is her Mom's.  They may be in her business but they bring the fun.  Also being at home she runs in to Eli.  The very Eli with whom she made the summer deal.

Eli has his hands full with Kinsey and her health.  With a breath of fresh air, Brynn comes  back to town and its like he can breathe again.  With his protective attitude, he enjoys being in both women's lives.  Even though he is only best friends with Kinsey, her friendship is more like family.

This story just kind of pounded into my head.  I felt like each chapter was a sock to the stomach and was like watching a very loud play.  So much action, so much to it, I felt a little overwhelmed.  I do not normally say this about this author's books.  This was a hard one to finish.  Honestly if it was not an author I love well, I would not have bothered.  I give this a 3/5 Kitty's Paws UP!

***This copy was given in exchange for an honest review by Edelweiss and its publishers. Working through the last quarter of Because He's Perfect anthology; hopefully I will be finished with this monster by the end of this coming week. For BL-opoly, I am reading Rainy Day Friends by Jill Shalvis. For COYER's Diverse RAT I'm reading Proper English, Where Snowy Owl Sleeps, Birth of the Butterfly, and Dance All Night. 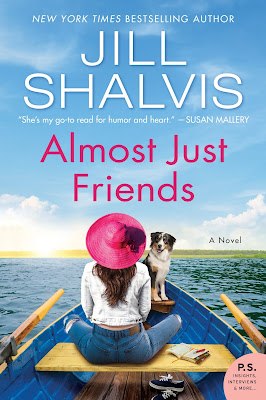 Piper Manning’s about as tough as they come, she’s had to be. She raised her siblings and they’ve thankfully flown the coop. All she has to do is finish fixing up the lake house her grandparents left her, sell it, and then she’s free.
When a massive storm hits, she runs into a tall, dark and brooding stranger, Camden Reid. There’s a spark there, one that shocks her. Surprising her further, her sister and brother return, each of them holding their own secrets. The smart move would be for Piper to ignore them all but Cam unleashes emotions deep inside of her that she can’t deny, making her yearn for something she doesn’t understand. And her siblings…well, they need each other.
Only when the secrets come out, it changes everything Piper thinks she knows about her family, herself…and Cam. Can she find a way to outrun the demons? The answer is closer than she thinks—just as the new life she craves may have already begun.
BUY LINKS for ALMOST JUST FRIENDS:
Amazon
IndieBound
Barnes & Noble
Books-A-Million
iBooks
GooglePlay

Book four of the series but is completely a standalone. Piper has spend part of her childhood and young adult life raising her two siblings. Now that they are out of the house and living their own life she wants to fix up the house sell it and continue on with her education to become a Physician's Assistant. But on her birthday her sister comes home unexpectedly and her brother soon after and both say are home for good for reasons they won't explain. Piper can feel herself slipping back into her old role but with the help of her new neighbor, Cam, she just might be able keep from becoming a mother hen again and become their sister and friend. But it's easier said than done especially when her siblings are hiding something from her. That's only part of the problem, Cam has waken a desire in her she has never felt before and knowing he plans to leave soon she tries to keep her heart out of the equation. Cam is trying to build a relationship with his father after the death of his brother and Piper is a good distraction. He knows as soon as he meets her that she is something special and the more he knows the more he wants her in his life.
Overall, it was a good read Cam was sweet and together things got pretty steamy. The story is emotional and funny at times. The two siblings are a hoot along with Cam's Dad. It's a heartwarming story of three siblings trying to find their path in life and learning it doesn't always go as planned even though you wrote it in your bullet journal.

The last time a woman had ordered Cam to strip had been a very different scene altogether, and it’d been a while. Generally speaking, he liked to be behind the wheel in most situations, but he’d never had any complaints about a woman driving in his bed. “Interesting bedside manner.”
“Okay,” she said. “How about strip, please.”
He laughed, and he realized that until tonight, it’d been a damn long time for that too. “Well, since you asked so nicely . . .” But still he hesitated.
“Trust me, I’ve seen it all before.”
He pulled off his shirt, wincing when the cotton stuck to the deepest slice across his chest.
Piper blinked, and for the first time all night, appeared short of words.
It was pretty damn cute, especially with the mud on her nose. “Thought you’ve seen it all before.” She bit her lower lip, eyes suddenly hooded, and he couldn’t resist teasing her. “So, how do I stack up?”
That got her, and she rolled her eyes. “Like you don’t know. Sit.”
The couch seemed too . . . personal, so he sat on her coffee table. She dropped to her knees at his side and doctored up first the cut on his left palm from where he’d nicked himself in his dad’s kitchen, and then the two slices on his left biceps, and then the biggest one across his chest, during which time he did his best to ignore the feel of her soft breath on his skin and failed.
When she’d finished, she looked down at his cargoes and saw the blood seeping through from his thigh. Rising to her feet, she stepped back, gesturing for him to lose the pants too.
“Seriously,” he said. “Doesn’t even have to be dinner. An appetizer would work.”
“If you’re real good, I’ll give you a sticker.”
“How about letting me look at your secret secret bucket list instead?”
Her eyes narrowed. “How about we stop talking now?”
“Wait.” He cocked his head. “Does this mean you also have a secret bucket list? And possibly a not-so- secret bucket list?”
She had hands on hips; a fresh, clean gauze in one hand, antibiotic ointment in the other, her expression dialed to Not Feeling Playful.
With a rough laugh, he stood and took the gauze and ointment from her. “I got this one, Doc.” And then he gestured for her to turn around.
She did with a smirk, and then spoke over her shoulder. “Didn’t peg you for the shy type.”
“Oh, I’m not shy.” He shoved his icy, muddy, wet cargoes to his thighs, and yeah, the cat had come within two inches of de-manning him. “Just didn’t want to have to fight you off.”
“Don’t worry,” she said. “I always get verbal consent first. And I bet you didn’t want me to see your tighty-whities.”
He gritted his teeth as he cleaned out the cut. Son of a bitch, that cat had gone deep. “They’re not tight and they’re not white.”
“Batman undies?”
“Commando,” he said, and that shut her up. When he’d finished and pulled his pants back up, he lifted his head and found her facing him. His brows went up. “See anything you like?”
Instead of answering, she blushed. And he grinned because, yeah. She’d definitely seen something she liked.

William Morrow are GIVING AWAY a copy of this book to enter it's easy just comment on my blog here or my Book likes page, my Facebook page, or my Instagram and on Jan 31st I'll pick a winner. Comments in each places will count as individual entries. 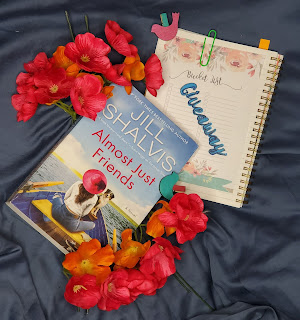 (fine print: I am only responsible for picking the winner WM is fulfilling the prize, the winner must supply snail mail address to me and I share it with no one except the person at WM who will mail it UPS. Open to US and Canada) 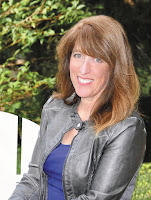 ABOUT JILL SHALVIS
New York Times bestselling author Jill Shalvis lives in a small town in the Sierras full of quirky characters. Any resemblance to the quirky characters in her books is, um, mostly coincidental. Look for Jill’s bestselling, award-winning books wherever romances are sold and visit her website, www.jillshalvis.com, for a complete book list and daily blog detailing her city-girl-living-in-the-mountains adventures.

Happy that's what I feel when I finish a Jill Shalvis book. I love this family and want to have them adopt me. Imagine a big loving Italian family who own a very successful winery. They love to help up the underdogs in the world. This story is about underdogs drifting till they land on this family's doorstep. If you love a good heart warming story about love, family, success, happiness, and trust, this is the author for you.