Log in with Facebook
or
Wrong email address or username
Sign up
Already on BookLikes? Log in!
Incorrect verification code
Please, check your email, the code to access your BookLikes blog was sent to you already.
Enter code:
« Back Send
back to top
Search tags: 2014-books 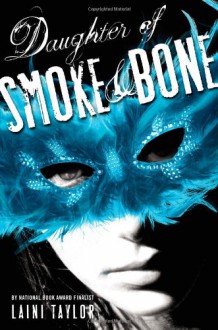 Summary -Around the world, black handprints are appearing on doorways, scorched there by winged strangers who have crept through a slit in the sky.

In a dark and dusty shop, a devil’s supply of human teeth grown dangerously low.

And in the tangled lanes of Prague, a young art student is about to be caught up in a brutal otherwordly war.


Review - Karou lives two lives she's a teenager that lives in Prague and has sketchbooks filled with different creatures and the other life where those monsters are actually real she is the errand girl to the chimera a man monster named Brimstone and it involves teeth Brimstone has teeth Karou doesn't know what is with the teeth and where the shop really is he says it is in Elsewhere . other characters that I loved are zuzana is karou's best friend . then we meet Ackiva who is an angel with vengeance for the chimera he and the rest of the angels are putting black handprints on portals when Ackiva and Kauro meet he tries to kill her and then stops Karou gets away and gets back to the portal she sees the door that has always been closed open and goes in and brimstone is there and this other creatures he throws her out goes home and she tells zuzanna and she believes her when kishmish is flying dead into her hands and the portal is gone. ackiva wants to know who Karou is and when he finds her Karou bares her hamsas and hurts him they go to talking and then something happens she starts to feel for him and when he notices her wishbone necklace and he says he knows who she is then his angel family appears he tells her to run and ackiva tells them that he fell for a chimera and they left . before I get into something big that I was not expecting I want to talk about the wishes so the wishes comes from pain scuppies are not that bad but bigger it's worse and Brimstone said hope is bigger than wishes . so when they break the wishbone it goes back to madrill I knew of her because she was akiva's love and she died but this was like the biggest thing I liked hearing all the stuff but when Mad is sentenced to death for being an angel lover that's when resurrection comes into play so apparently when you die you can take the soul and put it in another body and that's what happened to hide Mad from thiago the white wolf Brimstone put her as Karou WHAT! I didn't see that coming and the ending there all dead I loved this book so much I recommend it .

Favorite quotes Who are you ? he asked she almost didn't recognize the language he spoke as chimera so soft on his tongue don't you usually find that out before you kill someone.

Daughter of smoke and bone by lani Taylor

You haven't come up here before ? He asked she turned to him oh yes I bring all the boys up here . And if they don't meet your approval he said you can always push them off. Page 218

Fiala would so eat her words . You should bring him in to model on monday . Right said Karou I'm sure he wouldn't mind stripping for a bunch of humans disrobing said zuzanna ,prim .For art page 236


It's a wishbone , she told him , holding it out . you hook your finger around the spur , like this , and we each make a wish and pull. whoever gets the bigger piece gets their wish. Magic ? akiva had asked . what bird does this come from that it's bones are magic . oh it's not magic . The wishes don't really come true then why do it ? she shrugged . Hope ? hope can be a powerful force . Maybe they're no actual magic in it , but when you know what you hope for the most and hold it like a light within you, you can make things happen , almost like magic . Page 288
1 like
audiobook romance fantasy young adult paranormal series favorites 5-stars book-boyfriends books i ve read in 2014 books i ve read in 2017
More posts
Your Dashboard view:
All Reviews Text Photo Quote Video URL Activities
Liked posts Top Tags
Press About Terms of Services Privacy Policy Contact Us Blog FAQ Patronaty medialne BookLikes for Authors Partners panel more...
Team Themes Docs API Blogs
Copyright © 2022 BookLikes