Log in with Facebook
or
Wrong email address or username
Sign up
Already on BookLikes? Log in!
Incorrect verification code
Please, check your email, the code to access your BookLikes blog was sent to you already.
Enter code:
« Back Send
back to top
Search tags: Patchwork-Press

Megan Walker’s touch has turned to ice. She can’t stop the frost, and the consequences of her first kiss are horrifying. When her new powers attract attention, Megan finds herself caught up in an ancient war between Norse giants. One side fuelled by a mad queen’s obsession and an ancient prophecy about Ranorak, the other by an age-old grudge. Both sides believe Megan to be something she’s not. Both sides will stop at nothing to have her. Fire or frost. It’s an impossible decision, but she’ll have to act soon, because the storm is coming.

Erin Latimer is a young adult fantasy writer who currently resides in Vancouver, BC. She writes books, makes silly vlogs about writing with the YA Word nerds, and reads excessively. She has had an article featured in Chicken Soup For the Soul, and another in the Dear Teen Me online anthology. But mostly she writes about murderous queens and the magical teens who fight them. You can find her online at elatimer.com/

Getting to know Eliza Boyd, author

1.  You are known for binge-watching your favorite TV shows.  What are you watching lately?

I really DO love to binge-watch shows. Haha! The new season of Orange is the New Black came out on Friday, so I spent all of Saturday watching it.  I started watching Sense8 on Netflix too, and I’d love to binge-watch Between, but Netflix is only releasing one episode a week. I’d like to start Hemlock Grove and maybe rewatch Alias because I loved that show.

2.  We have seen on social media that you love "Pride & Prejudice."  Is Mr Darcy an influence on your male lead for your book?

Oh man, I love that book! I can’t say that I thought much about Mr. Darcy while I was writing OCN, but I’d love to write a Mr. Darcy-esque MMC one day!

3.  Do you listen to music while you write?  Is there a playlist or genre you prefer?

I usually don’t. I’m a big words person, so if I know the lyrics to a song, I’m probably singing along, which isn’t conducive to writing.  Sometimes, I throw on some wordless “Zen” hippie music or even some ragtime tunes to switch it up. I also enjoy Coffitivity.com – a website that pipes in sounds of a café. But I do love country music! 

4.  I hear you have moved to AZ from IL.  How is that weather change going for you?  Have you acclimated to the hotter location?

5.  Your new book is a story about taking a chance.  To me, that makes the lead character brave.  What do you want us to know about the book that is not obvious?

Good question! Let’s see. The book IS about taking a chance, making brave changes, but I think I’d want you to know that the book is also about accepting help when it’s needed. We all make choices that don’t put us in the position we thought we’d be in, so we can either make new choices or lie in the bed we’ve made. Chelsea is a woman who’s pretty down about her life, mostly because she thinks she can’t do much to change it for various reasons. So when the universe gives her a helping hand through new people in her life, she has a new choice: take the help or stay stuck. It’s always okay to accept help when we’re not yet strong enough to do things ourselves. 

6.  Do you have anything else coming soon?  Is there a sequel in the works?

Book 2 IS in the works. It’s written but it needs some editing love. But it doesn’t follow Chelsea. By the end of OCN, you know who book 2 is about. And there will be a book 3 about yet another woman, and she’s introduced in book 2, so I won’t say who it is. Then I have lots of other standalone books I would like to write. Lots of stuff coming!

I don’t think it was a book I loved. I think it was more than I finally felt like I had an original story to tell. Since I was young, I’ve loved to read. And my mother used to ask me all the time when I’d write my own book. For the longest time, I’d say, “No, I’ll leave that to the professionals.” Even when I started blogging. I didn’t think writing was for me. And then I became an editor (which always seemed like the more reasonable path for me). That’s when my answer changed to, “Maybe when I have an original story to tell.” And about nine months after that, I realized I had a LOT of stories to tell. I’ve been writing ever since. 

***If you have missed my review for OCN, please CLICK HERE to read now*** 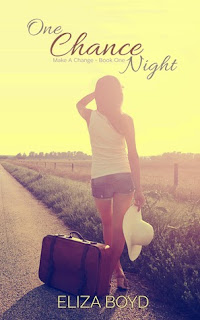 On the surface, Chelsea Greer has it all: A loving husband. A nice house. A good job. In reality, she works hard to maintain the illusion that is her life. She's also missing the most important thing: Love.  One night could change her life. One night could give her the strength to rediscover what's important. In one night, she could find love when she most needs it and least expects it.  All Chelsea has to do is follow her heart after One Chance Night. 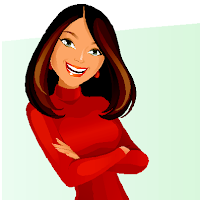 Eliza Boyd is a contemporary women’s fiction and romance author. Also an avid reader, she writes novels, short stories, poetry, and whatever else strikes her fancy. Born and raised in Northern Illinois, she now lives in sunny Arizona with her husband and her plethora of animals. When she’s not reading, writing, or working, she can be found walking around her neighborhood (for exercise, not for stalking), taking photos of her pets, or catching up on her favorite shows. Catching up really means binge-watching. Music to Mellow out to:

All of Me – John Legend

Stay with Me – Sam Smith

Don’t Wake Me Up – Chris Brown

Safe and Sound – The Civil Wars

Kate Thomas, is the author of the upcoming Equilibrium Series, a five-book supernatural new adult series, with plans for a few more series in 2015. She is a CPA by trade, a church planter and entrepreneur at heart; however, writing and reading are passions she just can't help but indulge in.

With more ideas than one person should be allowed, she is blessed to have a muse that doesn't seem to take a vacation and more energy that one might consider healthy.

With the truth of Ellie's place among the Balance Keepers finally coming to light, training now begins. She must learn to harness the powers that are growing within her, some spiraling out of control. Confusion and frustration become her constant companions, as her search for answers does nothing but push her further from the man she's come to love.

David is The Light, the speaker of truth, the whisperer of good in the world. His desire for more than he can have with his new apprentice tears at the fabric of his own stability, bit by bit. He knows what the future holds — and just how damning it will be for Ellie if she's not prepared to handle it — but he's forbidden to help.

As tragedy becomes reality, will she reach for The Light, or run into the soothing arms of The Darkness?

Kate Thomas, is the author of the upcoming Equilibrium Series, a five-book supernatural new adult series, with plans for a few more series in 2015. She is a CPA by trade, a church planter and entrepreneur at heart; however, writing and reading are passions she just can't help but indulge in.

With more ideas than one person should be allowed, she is blessed to have a muse that doesn't seem to take a vacation and more energy that one might consider healthy.