Log in with Facebook
or
Wrong email address or username
Sign up
Already on BookLikes? Log in!
Incorrect verification code
Please, check your email, the code to access your BookLikes blog was sent to you already.
Enter code:
« Back Send
back to top
Search tags: Wild-Cards Publisher's info on book is here .

There's a book club for these freebies at http://booklikes.com/book-clubs/book/88/tor-monthly-free-ebook-science-fiction-and-fantasy . Aces High is a club for the elite aces,that is to say the aces with the most extreme powers.

That's why I like this series every character has his/her own power.Some of these powers are pretty minor but some of them are are major.Like magic tricks vs. superman.No matter which character it focuses on it's a fun ride. After hearing several people talk about this series in a positive way,I read the first one.

A space virus is exploded in the air above Manhattan in the 40's and is quickly spread overseas.The virus quickly kills thousands,mutates an unknown number more.And sometimes it's terrible  mutation and a very few got a mutation/powers.

This made it a read better than I was expecting,I'll continue the series.

This was an impulse buy when I was between books and walked past a book store.
Part of a series where a virus has turned some people into super heroes and others into mutants.
The background/characters are pretty much X-Men/Doom Patrol, but given super swearing powers on top of everything else.

What I didn't know is that the books are written as story arcs, and this was the final installment for this particular arc.

Based on that, the start of the story was confusing as different heroes/mutants popped up with a lot of stuff already going on around them. Once you get used to names then the back story is explained to show how people got to where they are.

When the main part of the story gets going, and you've got a handle of who is who, and what their powers are, then it turns into some Horror from beyond the Stars novel.

As there are multiple characters, all written by different authors and then stuck into some semblance of order by the editors, the story can be a bit choppy in places and differences in writing style are apparent.

Overall it's a fast paced novel with a lot going on, but probably not the best book to read as a starting point to this franchise.
Like Reblog Comment
show activity (+) 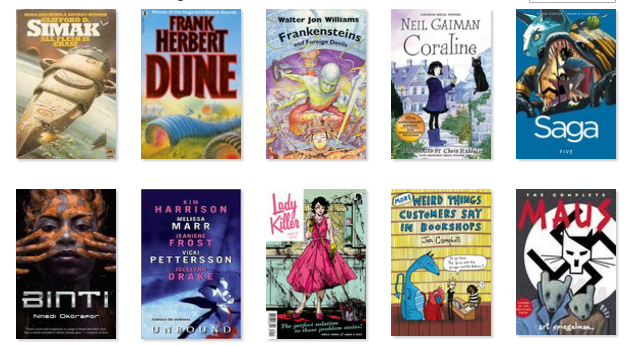 I’ve covered this book in too much detail to add anything here. Well okay, I’ll just leave this joke here:
Check out the final review instalment here.

Coraline is a book that I would have loved to read as a kid. It is full of Dahl-esque quirkiness…okay, who am I kidding? I loved it even as an adult! Two of my favorite quotes:

I dunno what to say about this book, except that it had nothing and everything in it! I wanted to pick it up as soon as I got off work and I didn’t want to put it down. The plot is simple and straightforward. The author hasn’t weighed it down with complicated science. You can see where the events are leading up to and yet… I am still ambivalent about the ending but I guess, I’ll just let it sink in for a bit before I come to a decision. This was my first Simak book and I can’t wait to gobble everything else by him!
P.S. The cover has NOTHING to do with what goes on in the book.

This comic will just mess you up and yet, you’d be unable to put it down. Just look at how beautifully it portrays the impact of the dreadful event on not just the parents who experienced it but also on their kids who had to live with it:

Saga continues to be its beautiful, painful self. I’ve stopped thinking that the story is going anywhere. I just read it because I can’t not read it! Some of the artwork: 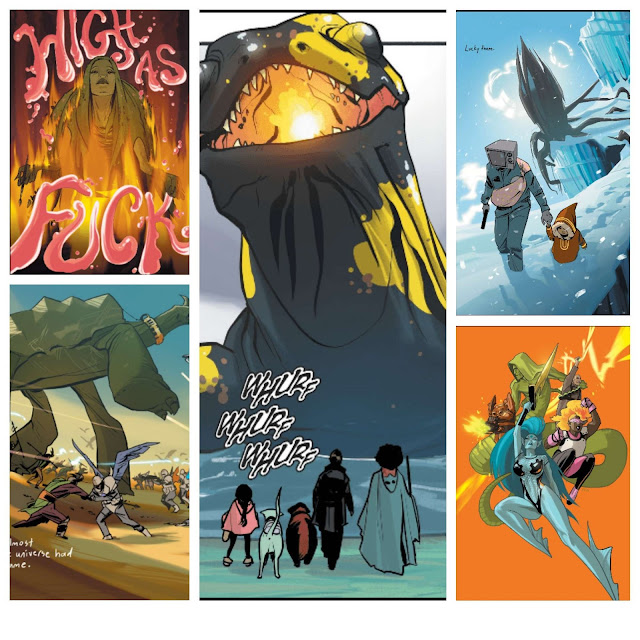 The first one was wayyyyy funnier.

Beautifully drawn but lacks anything that’d make it stand out!  I don’t think I will be continuing.

According to GRRM, this book is the first ever short story written in the Wild Cards series. However, it wast published as a part of the series, which had already changed and evolved.
I loved this nod towards Asimov:

“What are your orders?”
“To obey my creator, Dr. Maxim Travineck. To guard his identity and well-being. To test myself and my equipment under combat conditions, by fighting enemies of society. To gain maximum publicity for the future Modular Men Enterprises in so doing. To preserve my existence and well-being.”
“Take that, Asimov”, Travineck said.

and this witty repartee:

“I am beginning to realize, said the android, raising a hot buttered rum to his lips, that creator is a hopeless sociopath.”
Black Shadow cnsidered this, “I suspect, if you don’t mind a touch of theology, this just puts you in the boat with the rest of us,” he said.