Log in with Facebook
or
Wrong email address or username
Sign up
Already on BookLikes? Log in!
Incorrect verification code
Please, check your email, the code to access your BookLikes blog was sent to you already.
Enter code:
« Back Send
back to top
Search tags: may-clean-sweep-arc-challenge

Sometimes I just get in the mood for a little fun and entertainment and no one does it better then Preston & Child! Years ago when I first came across them, I devoured all of their individual and their combined books, one right after the other because I just couldn't get enough! They are that good & I've yet to come across a book of theirs that I haven't liked. Now some I rave over a little more then others of course, but every single book of theirs have been solid, well-written stories. I've tried to find other comparable authors so I can continue my arm chair adventures Preston & Child style while I'm waiting for a new book of theirs to drop but I've yet to come across anyone even remotely close to their capabilities. The other books I've tried usually have either corny characters I can't relate to or cheesy dialogue that's just annoying and distracts from the plot so needless to say, when a new Preston & Child book comes out I'm all over it!

This sequel to The Ice Limit especially, I've been waiting for. It's been a long time coming. If you're a big fan like me you're imagination has probably been running wild trying to guess which direction this sequel was going to go. I can honestly say my guesses were not even remotely close. I knew though that this sequel was going to have some pretty big shoes to fill because the original story was fantastic! Like with a lot of Preston & Child books though, you have to willingly suspend your disbelief and this one was no different but I found I had a harder time with this one. I just didn't care for the route it took with the 'alien' origins of the meteorite or the "worms." I also thought the ending was very anti-climatic! Overall, the sequel didn't live up to the original story unfortunately but it was still a fun story; good for when you want some entertainment that doesn't require a lot of brain power.

*I received this ARC from NetGalley & Grand Central Publishing in exchange for an honest review! Thank you!

I didn't care for that ending at all -Review to come... 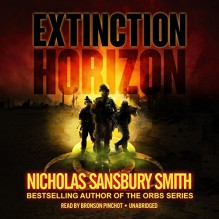 Just recently I read "Hell Divers," also by Nicholas Sansbury Smith and it was beyond fantastic! I'm seriously still thinking about that book today. I loved it so much I was determined to buy and read everything else the author has ever written, then lo and behold the next day, I received this awesome email from the author himself generously offering to gift this series to me if I was interested in reading & reviewing it. I was not only pleasantly surprised and ecstatic but I was thinking damn, this is a man after my own heart. Not only is he a fabulous writer but he can read my mind too! Needless to say, I told him of course I'm interested, so he graciously gifted me the books and here we are. *Just to be clear, my review is totally my own and is in no way influenced by my outside communication with the author...

What happens when a variant strain of Ebola starts turning man into flesh seeking, deranged monsters aka Variants? Absolute chaos! A military ghost team and a team of scientists are doing everything they can to contain and stop the virus but the virus is spreading so fast that the only realistic outcome is extinction of the human race! Can they figure out how to eradicate the Variants before the Variants eradicate the entire human race?

From the moment I started listening to the story the action was in full force and didn't let up until the very end which is exactly what I was in the mood for. I especially appreciated the level of technical detail and complexity that went into the virus and Variants plot. It was completely realistic and 100% believable. The author also has a knack for developing characters that you want to read more about and ultimately form an attachment with. I did have deja vu a couple times though. I felt like there was some redundancy in several areas of the plot. That's the main reason I went with a 4.5 star rating. All-in-all though, this was a very solid start to the series and I'm looking forward to continuing the action in book two, Extinction Edge.

*I received a copy of this book from the author in exchange for an honest review. Thanks Nick! 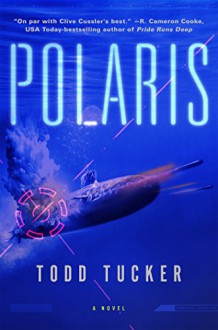 "One day in the not-too-distant future, Pete Hamlin regains consciousness deep inside the nuclear submarine Polaris. He's got a gun in his hand, a fire raging outside his door, and a dead man at his feet. Soon Pete discovers that the ship is in the middle of a mutiny - and he has no idea what side he's on."

"He finds the ship is now commanded by the beautiful but volatile Hana Moody. She's locked the former captain, Finn McCallister, inside a steel trunk, accusing him of treason. Frank Holmes is Moody's loyalist, an imposing physical presence who shares Moody's unquestioning devotion to the cause of the Alliance. The ship's feckless doctor hovers in the background, unable to help Pete find out the truth about the Polaris. And outside the ship's steel hull lurks another submarine, yet another presence that might be either friend or deadly foe."

"To save himself and discover the truth, Pete must journey with Polaris back to a forlorn piece of rock in the middle of a dangerous ocean: Eris Island. To get there he must fight murderous shipmates, a swarm of bomb-dropping drones, and a plague that is attacking everyone on both sides of a battle that Pete barely understands. Only on Eris Island does Hamlin finally learn the truth."

I love reading stories that are set on ships or in the ocean so when I saw this book was labeled "submarine warfare" I was instantly intrigued. The setting didn't disappoint  either. A majority of the story is set on the submarine, Polaris, so I got a very intimate portrait of the sub and all of its unique features and dangers and how life on board is for its occupants.  There's also non-stop action, drama and close quarter encounters with an enemy sub which all combined, made a very fun and suspenseful story.

Another added bonus is that unmanned drones, which have been very popular lately, play a very large part in the story so there is a ton of very cool information about them, their history and how they work. If you've ever been curious about drones, you should definitely check this one out. I did not realize the full extent of their reach and capability until reading this book.

The only minor drawback to the story was that there weren't any clear separations or time stamps between plot changes and flashbacks so I found myself somewhat confused and had to back track to figure out if we were still in the past or had moved to the present. This was an ARC though so this should hopefully be fixed before final publication.

All-in all though this was a very well-written story. I was enthralled from the moment I picked it up. The underwater submarine setting, the fast pacing and the unique plot inclusion of the drones are all excellent reasons to give this book a try. It's the perfect beach or pool read!

*I received this ARC from NetGalley & St. Martin's Press in exchange for an honest review.

Finished the audio this morning- Review to Come...