Log in with Facebook
or
Wrong email address or username
Sign up
Already on BookLikes? Log in!
Incorrect verification code
Please, check your email, the code to access your BookLikes blog was sent to you already.
Enter code:
« Back Send
back to top
Search tags: military-fiction 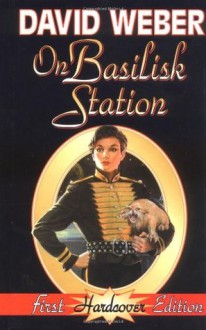 Honor Harrington in trouble: Having made him look the fool, she's been exiled to Basilisk Station in disgrace and set up for ruin by a superior who hates her. Her demoralized crew blames her for their ship's humiliating posting to an out-of-the-way picket station. The aborigines of the system's only habitable planet are smoking homicide-inducing hallucinogens. Parliament isn't sure it wants to keep the place; the major local industry is smuggling, the merchant cartels want her head; the star-conquering, so-called "Republic" of Haven is Up to Something; and Honor Harrington has a single, over-age light cruiser with an armament that doesn't work to police the entire star system.

But the people out to get her have made one mistake.

They've made her mad!

Honor Harrington—a very obviously virtuous name for a woman who is going to be all about her own personal integrity. I liked Honor as a character because Weber depicts her as a strong, decisive leader. Mind you, he throws in a few stereotypes as well—she’s “not good at math,” she has striking good looks but thinks she’s lumpy and unattractive, and she’s single, so she has to have a cat (because we single women are always just steps away from being crazy cat ladies). Nevertheless, if anyone can make lemonade out of the lemons that life handed her, it’s Honor.

There’s lots of good action, but Weber could take some lessons from Lois McMaster Bujold and her Vorkosigan series on how to keep the plot flowing. (I found quite a few similarities in how talented both Miles Vokosign and Honor Harrington are). Unfortunately, OBS has pages and pages of different commanders going on and on about what they were going to do plus how and why they were going to do it. *Yawn!* Also, during the final, dramatic space chase, there were more pages and pages devoted to the history of hyperdrive. Really? In the middle of the supposedly high stakes chase? Dude, I’m glad you thought about these things, they’re great background info for you as author, but why are you dumping them on your readers? I almost never skim and I skimmed until I found action again.

I also had to go back and re-read bits, where the space Navy and the Marines annihilate thousands of Medusan aborigines! I just couldn’t believe what I was reading and that they were completely unconcerned about repercussions of such an act. Seen through a 2019 lens, that just seems wildly out of touch. How times have changed!

Still, it was a pretty good story and I’m glad that I read it. I’m maybe not excited enough to pursue the series, however. I hate spiders. They totally creep me out and I love it, which is why I had to read Arachnosaur by Richard Jeffries. lol
Soldiers facing off against terrorists. Death, blood, bullets and savagery.
Key struggles to make sense of what was happening to him, a concussion messed with his mind. Could he believe what he was seeing? The squad had been slaughtered. How many were left besides him? He wanted answers.
And….we know something worse is coming his way.
Key and Daniels are opposites, but work well together as a team. Key is methodical and Daniels a bit reckless. Can they save the world from the egomaniacs who think they can control their new weapon? Foolish, foolish men.
I love the combination of military intrigue and giant spiders. So much of it read as if it could be real. The writing was detailed and the action was non stop.
The world…well…I loved to visit it, but don’t want to live there.
I would love to be on their next adventure.
I voluntarily reviewed a free copy of Arachnosaur by Richard Jeffries. Legion of the Undead really hit the spot; I need a second helping! First, I love Roman Empire stories and I’ve come to love zombie fiction in the past few years. Now we have the perfect mash-up. Hungry zombie horde, meet the Roman legions! Cue evil laughter!

Often with ancient Roman historical fiction, I don’t see too many female characters and the few that are present are usually only there to act as someone’s love/lust interest. Not so with this book! Yay! The ladies are true to accepted Roman Empire gender roles but they also get plot-relevant stuff done. Even the minor but evil Sevillia did something that affected the plot. And I love Lucia, who is a 16 year old thrown into the midst of this zombie uprising. She’s not a cliched uber-tough zombie stomping heroine but she is practical, saves the day a time or two like the other heroes, and doesn’t fall to pieces when she needs to be rescued.

Of course Vitas Protus is my favorite. He’s an archer that is catapulted up into the ranks as the zombie issue becomes a real problem. He keeps his wits about him, takes advice from those around him, and gets stuff done. I loved how he watched out for Regulus, the 14 year old lad that was forced into the military. Then there’s big Antonius too. He’s also a practical sort, giving the soldiers orders to aim for the heads if they want to take out the zombies.

Starting out on the outskirts of Germania where the Roman legions were pushing back the German tribes, Vitas has to get his little band to safety. First, it’s to the their encampment and then on to the estate of Governor Clemmons. There Vitas gets his orders to head to Rome with a dire note and Lucia, who can speak to her merchant father’s home being overrun with these Risen (as the zombies are called in this book). Not everyone makes it out unscathed. In fact, a character I had gotten a little attached to takes one for the team before the end. There’s also a touch of intrigue and betrayal!

Anyway, it’s just a really good book and since we’re in November, I can safely say it’s one of my favorites of the year. Legion of the Undeadhas set a new bar for zombie Roman Empire historical fiction! 5/5 stars.

The Narration: Terry Self really out did himself with the narration. Just a great performance all around. He has distinct voices for all the characters and his female character voices are feminine. There’s a few accents as well (Spain Spanish, Gaulish, and Chinese) which he pulls off quite well. In fact, Terry Self sounded like he was really into the story, it never being a dull moment. There were no technical issues with this audiobook. 5/5 stars. This is a genre that I seldom read, near-future, sort of post-apocalyptic, military fiction; but DAMN, I like this series. It's almost like ... well, I want to say good Tom Clancy with twists.

This is the continuation of the events in First Light, book one of the series.  Again, we follow the 1st person narrative of Lieutenant James Shelley as he navigates this screwed up world.  Shelley is the beneficiary of some high tech body modifications, even thought they sometimes seem like a curse and Nagata writes it so well that even a know-nothing like me understands what's going on.  Even the trial/court scenes were eminently readable and that's not always the case.

The world is dark and cynical and full of conspiracies and plots and counter-plots and the author does them all justice.  I never predicted what was happening until it was either happening or just about to go down.  And even then, there was always some twist I didn't see.

This is a techno-thriller in the true sense of the word, I think.  I was on the virtual edge of my seat almost the whole time I was reading.  We meet up with lots of old friends, make some new ones and come across some not so nice folks too, familiar and otherwise.  And I should have seen that twist coming at the end, but I didn't, and damn, it's a good one!

So yeah, I really enjoyed my read and I'm glad that I have the final book in the trilogy nestled nicely in my Kobo. July has proven to be a horrible month for me, so I went for a light read as the Virtual Speculation pick.  Old Man's War is a light military SF read, written in a similar tradition of Starship Troopers, but it also manages to act as both a tribute and satire. 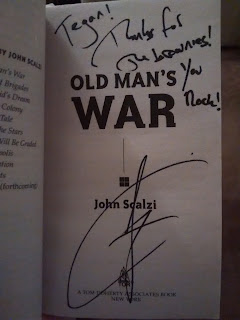 In general I enjoy Scalzi's work.  Fun, light reads, and he's proven to be a pretty good person as well.  This is the second Scalzi read I've done, the first being Lock-In (which I've still failed to post an actual review of).  I've also met Scalzi several times, the last time being several months ago where, as the inscription on my copy of Old Man's War indicates, I brought brownies to the author event.  In case you were wondering, it was a giant star brownie.  Sadly, I was trying a new recipe for making them from scratch, and it was not my best baking result.  (Sorry, John).

I ended up sitting down and reading the book in three days.  It would have been fewer, but I read another book in the middle of that.  As I indicated, it's not a heavy read.  Almost all aspects of the book is kept relatively light, and you know what, that's exactly what I wanted.