Log in with Facebook
or
Wrong email address or username
Sign up
Already on BookLikes? Log in!
Incorrect verification code
Please, check your email, the code to access your BookLikes blog was sent to you already.
Enter code:
« Back Send
back to top
Search tags: silver-publishing Bravo to Shannon Felton on this, her debut novella! After reading her short story in MIDNIGHT AT THE GRAVEYARD, I was super excited to read more from this author and she did not disappoint!

Beneath a dying town, whose only means of support is the prison, a young man and his friend discover hidden tunnels one night when a brick fell out of the basement wall. From that point on, something seems to spread throughout this already bleak place. Were these tunnels used by escaped prisoners? What's causing the noises in the walls townsfolk are now hearing? You'll have to read this to find out!

Stewartville as a town rang true to me. There are several places here in the northeast that have dwindled to nothing as manufacturing jobs have been moved overseas. Just driving through some of these places you feel suffocated with despair. There is also a severe opioid crisis going on in several of these towns as well. In this manner, Stewartville became an all too well known character in this tale. The despair....the grayness...it became an entity of its own.

Ms. Felton has demonstrated a command of language and characterization that, I'm sure, will hold her in good stead as she, (hopefully?), continues her career in dark fiction. As far as I'm concerned? You can sign me up right now for anything she writes in the future!

*Thanks to Silver Shamrock Publishing for the e-ARC of this book in exchange for my honest feedback. This is it!* 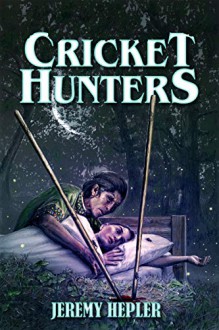 Five friends bond into the group they dub 'the Cricket Hunters' under the guidance of Celia and her abuela, a practicing bruja.....weaving a little of that white magic of childhood with the beliefs of their friend and her grandmother, while doing all the things that kids with bikes, woods and soaring imaginations do.

But with the sunshine comes the darkness.....and all magic isn't white. For one of them will disappear and never be seen again.

15 years later, Celia and Parker, one of her fellow hunters, are married. Celia has never let go of her abuela's teachings. But the past isn't finished with her or the Cricket Hunters, because now it's Parker's turn to vanish. And Celia will need the strength of her faith, and the magic of her childhood to find out what happened to her husband, and her long lost friend, because a darkness is gathering around her.

Jeremy Hepler delivers a brilliant coming of age tale, a mystery that runs the gamut from heartbreaking to bone chilling, filled with hope, heart and even horror.

I'll be watching for Jeremy's next books with avid anticipation.

Many thanks to Ken at Silver Shamrock Publishing, and Jeremy for the review e-ARC. Two young brothers formulate a daring plan to escape from the cruel attentions of their abusive father, and find their long lost mother.
The best laid plans of mice and boys...because their father isn't the only threat standing in their way.

A poignant, heartbreaking coming of age novella, IN THE SCRAPE delivers on an emotionally visceral level.....from the power of love, to the chains that abuse forge, to the strength that comes when one pushes the innocent to their limits...and then over those limits.

James Newman and Mark Steensland work together is flawless, their writing styles melding together perfectly, becoming one powerful, compelling voice.
This is a team readers need to keep their eye on.....along with Silver Shamrock Publishing.
Well done.

Many thanks to Silver Shamrock Publishing for the eARC of this book in exchange for an honest review. I bought this a long time ago and only just now got around to reading it. I wish I could say that I should have read it sooner, but I can't. It was awful.

Jay, the main character, was an annoyingly perfect Gary Stu. He was gorgeous and better at everything than anyone else, including upper-level students and his professors. He had the magical power of three people, he could speak perfect Gnome, he could bond with an unheard of number of gnomes, he could see people's magical signatures, he could put together a persuasion potion better than his teachers, he instantly attracted the attentions of the most beautiful girl at school. The list went on. He repeatedly worried about alienating other students because he knew so much more than they did, but he needn't have worried – everyone liked him, except the one cardboard bully.

Personally, I thought Jay was an ass and a snotty know-it-all. He spent much of the story mentally grumbling about how he already knew everything the teachers were explaining and wondering why he was even at the school. At one point, he was asked to demonstrate a persuasion potion and told to use one of his fellow students as a guinea pig. After everyone agreed that the (male) student was heterosexual, Jay told that student to kiss him, which he did. Like I said, Jay was an ass. But, since he was so perfect, wonderful, and gorgeous, the student's only reaction later was to comment that Jay was a good kisser.

The story had enough elements in common with the Harry Potter books that I did some checking to see if this was actually P2P fanfic. I couldn't find any evidence of that, but, yeah, there were a lot of elements in common. Jay was an orphan whose parents gave their lives for him. Devin, Dean, and Dan were identical triplets who were often confused for each other, much like Fred and George. The gnomes seemed a lot like house-elves. Michael Dragonspawn was basically a Harry Potter slash fic version of Gilderoy Lockhart.

At least one fantasy cliche seemed to be thrown into the story just because – although Harry (I mean, Jay) mentioned that “names have power,” this little detail was never used in the story, beyond allowing him to prove, once again, that he could do everything better than everyone else.

Werewolf soulmate cliches were everywhere, as well. The instant Jay and Thomas met, they could barely keep from humping each other in public – they were, of course, soulmates. Sex was required to finish the bond (by the way, only penetrative sex counted). Reminiscent of the rules in Eileen Wilks' World of the Lupi urban fantasy series, Thomas would be forever bound to Jay if they had sex, unable to ever have sex with anyone else, while Jay would still be free to have sex with whomever he chose.

Well, that wasn't entirely true, because Thomas was also afflicted with insane (and cliched) jealousy. If Jay were to sleep with someone else, he would kill that person. Heck, he came close to attacking the student who kissed Jay under the influence of the persuasion potion. He didn't even like it when Jay comforted a student who was distraught over the deaths of some gnomes. Never mind that neither Jay nor the student were doing anything even remotely sexual. Jay, by the way, thought that Thomas' constant jealousy was amusing and possibly even cute.

When Jay first met Thomas, he was fine with the idea of dating him or even living with him. He would especially have liked to have sex with him. Yes, he practically jumped for joy at the idea of having sex with a perfect stranger. But he absolutely didn't want to be bonded to Thomas. Until he suddenly did. Like the writing itself, the story and characters' emotional progression (ha!) were choppy and awkward.

I couldn't connect with any of the characters, and the “emotional” moments left me numb. The sex happened too suddenly to be sexy. All in all, this novella turned out to be a great big failure for me. I'd say that I don't plan to give the author another shot, except it looks like I have another one of Kell's works in my collection. This is why my e-book shopping sprees are not always a good idea.

This story is part of a series and must be read in order. Sam has left the biker life behind him as he completes the FLETC training to become a US Marshal, but shaking off his past isn’t as easy as he hoped. Marco wishes Sam would open up with his concerns but has more important things to worry about when a new case lands with crazy movie stars. As Sam graduates tragedy strikes and the US marshal’s pull together to get justice for their colleagues.
Once again we are given an exciting instalment of the US Marshal’s from Orgasmic Texas Dawn as they keep the peace and chase down the worst of society. We open up with Sam undergoing his training for the US Marshal’s and seeing him juggle his way through as a fellow trainee tries to make waves and a trainer has it out for him. With Marco we see him taking up cases that are troublesome with idiot movie stars, and missing Sam desperately. We watch as both men make the best of the current situation and hot snatched moments as they quench their driving need for each other.
As you well know (you have been following the series, right!) Sam and Marco have had a bumpy ride but it looks like there is a light at the end of the tunnel. Both men have to juggle being apart and missing each other while Sam is training, but Sam isn’t one for sharing his problems and as trouble is being caused for him he finds a solution that just might work. Marco might be able to pry some details out of Sam and admire the way Sam handles things but it doesn’t mean he is really happy that Sam won’t lean on him.
I really enjoy At Heart as we see both Sam and Marco really come into their own as a super-hot couple, they strike sparks off each other whenever they are together… or on the phone to each other. They find a great balance and begin to move forward on equal footing and they both make it clear how much the other means to them. We have excitement from all angles in this story with a shocking scene at the graduation party, mental drugged up movie stars, and jealousy and resentment playing their parts. We see all our favourite Marshal’s *sigh* and it looks like there’s a surprise in store for one of our fine Marshal’s.
I recommend this to those who love US Marshal’s hunting for justice, sexy bad boy bikers turning over a new leaf, passionate horny men and snatched moments, a great storyline and a wonderful ending.
A.J. Llewellyn D.J. Manly Gay contemporary MM contemporary MM Good Book Reviews Orgasmic Texas Dawn Series Pixie's Reviews Silver Publishing
Source: mmgoodbookreviews.wordpress.com
More posts
Your Dashboard view:
All Reviews Text Photo Quote Video URL Activities
Liked posts Top Tags
Press About Terms of Services Privacy Policy Contact Us Blog FAQ Patronaty medialne BookLikes for Authors Partners panel more...
Team Themes Docs API Blogs
Copyright © 2020 BookLikes