Log in with Facebook
or
Wrong email address or username
Sign up
Already on BookLikes? Log in!
Incorrect verification code
Please, check your email, the code to access your BookLikes blog was sent to you already.
Enter code:
« Back Send
back to top
Search tags: My-Sweet-Audrina Every Friday, my husband drops me off at the Half-Priced Bookstore and my mom picks me up when she gets off work. Otherwise, I would not see her often. I bought her this book because she couldn't remember if she read it (she has read other V.C. Andrews books and borrowed mine when I was a teenager!) My Sweet Audrina is a "Stand-Alone" novel V.C. Andrews wrote before passing away in 1986. In 2016, Andrew Neiderman, the ghostwriter hired to carry on V.C. Andrews name wrote a sequel.

List of V.C Andrews Books [and which are ghostwritten!]

This is a weird way to review, but hopefully, you go with it. I had a very special moment where I randomly had a book talk with my mom on Facebook and I wanted to share it. It is a memory I want to keep! This will contain spoilers! I advise you to please read the book before reading this. Unless you have no desire to or don't mind spoilers.

Be warned, I am putting a bunch of photos to show the kind of goofy person my mom is <3 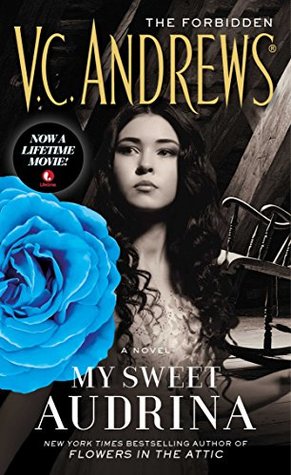 The whole interaction started with me posting this: Mom: I finished my book, I need the next one!! Leigha: The Audrina one? I need to read the second one, too. I'm a little put off that it is by a ghostwriter and may or may not be how VC Andrews wanted the story to go.

Mom: Yes! That's very true but I want to read it anyway...The one I just read was sooo good!

Leigha: Were you mad at the ending like I was?! Mom: Yes, that's not how I thought it would end...

Leigha: I was so annoyed with Audrina! I know she cares about her sister, but part of me just wanted her to leave! I get why she stayed and I probably would have to if I was in her shoes and had a seemingly helpless person to look after.

Mom: I couldn't believe she was going to leave without her!! Leigha: Sylvia refused to go and she knew her dad wouldn't hurt Sylvia. However, I think Sylvia threatened to jump from the tower thing and that is why Audrina stayed. I think Sylvia is to blame for some of the deaths in the house. Or partly to blame for accidents that ended in death. I also think she knows more/is smarter than they give her credit for.

Mom: Same, she was smarter than everyone thought. Vera was awful, I disliked her throughout the whole story.

Leigha: Yeah, but she is a tragic case. She had the brittle bone thing and was always hurt/sick/in the hospital and was neglected and knew her birth father refused to accept her as his daughter. That's got to mess you up. Mom: True, but Audrina was never mean to her and she treated her so hateful. Jealousy, I suppose, but she could've had a friend in Audrina if she would've only treated her kinder.

Leigha: Yeah, which is something else that makes it so tragic. Vera was very close to having a friend (a sister by blood), but she let her childhood jealously fester. She knew they were sisters and that her father adores Audrina to the point of making up the whole lie about "first Audrina" being the one to get attacked and "killed" so Audrina would forget her memories. Vera had jealousy and probably mental health problems, depression and trauma from the way she was treated/neglected by her father. I think it is so sad that Vera died and they never got the chance to reconcile. I'm not sure Vera would want to after what she was going to do to Audrina, but still... Vera at least needed medical help for her mental health. I mean she went crazier over time and was going to let Audrina die.

Mom: I agree. Her own mother wasn't very loving towards her either. Leigha: I think her mother held resentment toward Vera. She also didn't seem the type to know how to properly show her love. She loved Audrina's(and Vera) father so much (who can understand why!?) and when Audrina's mother died, she let him use her no matter how much it hurt her. Another sad case. This book was full of people with tragic backstories.

Mom: Yes, it was. I really want to see how the ghostwriter finishes Audrina's story.

Leigha: It is called Whitefern and looks like a doozy. Don't read the whole description. I think it gives too much away. It was published in 2016, so way after VC Andrews died. The reviews are really bad for this one. People are mad that the ghostwriter (and the publishers) are still piggybacking off VC Andrew's name and popularity. Mom: Yeah, I just saw some of those reviews! I don't think any I saw were good! Oh no...

Leigha: I liked some of his ghostwritten books (back before I knew they were ghostwritten.) But people claim the more this man ghostwrites for VC Andrews, the worse he gets.

Mom: I'll just have to see for myself.

So will we like the ghostwritten sequel? The world may never know because we can't find a copy and I like to buy most of my books used in the wild (at the local HPB)

I believe if my mom did ratings, she would have given this a gushin5-star rating.

I think she did a fantastic job with the Flowers in the Attic and the Heaven books, but this book is unique in its own way and tells a compelling story within one book, instead of a series. To be frank, this sort of story works better as a standalone, otherwise the story would have dragged on)

This is the only standalone VCA ever published, but oh what a book it is. Things are not always as they seem, and there are always enough plot twists to leave me satisfied (even if some of them are considered cheesy) Every time I read it, I always notice new details.

The revelation about the First and Best Audrina was a shocker (at least some of it was, to me) and I shall not say what it is because I shall not spoil you! And as for who the real villain is? Well, doubtless Vera is a villain! But as you read it, you will realize that Vera is but the tip of a iceberg. So read this book, gasp and thrill at the secrets and twists, and enjoy! I read this book when I was 12 or so, and I remembered liking it, so this time I wanted to read it in English and not in French... I guess the "ignorant preteen" + "bad translation" combo left me with a very different impression than the one I got now. Some 25 years later, I definitely didn't like it.

Too many twists that veered into sensationalist territory, and not in a good way (so many people falling down the stairs). Very stilted dialogues that nobody would use, especially not in the 70s or 80s. Audrina being pretty dumb, all things considered, because even when she had all the hints, she still needed other characters to spell it out for her. Also every female character being either the self-sacrificing type who stays with others out of "duty", or the ruthless-seductress type—virginal and pure women vs. debased and sexualised ones. Not to mention the "it's all the woman's fault" undertones (marriage going sour? It's Wife's fault, because Wife isn't sexually active enough for Husband to be happy, and so it's normal that Poor Husband cheats on her).

I guess reading stuff I liked when I was in my teens isn't always a good idea. :/


liked it
bookshelves: 2016, 90s-young-adult-section, blast-from-the-past,childhood, co-workers-recommend, family-life, horror, kindle, new,series-read, sexy-sexy-sex, unreliable-narrator, very-violent, ya
I've really struggled with my rating and what I want to say about this book. My inner middle school aged self is shamelessly entertained by this absolute trash. And it is absolutely trash. The characters are so over the top unbelievable. All the adults in this book should be in jail for child abuse. The dad probably more so than the rest. He's a real piece of work. I even had a hard time with the supposed likable character. So much woman on woman hate in this book. I know it was the late 70's early 80's, but come on. These books are and always have been targeted to teenage girls and women which makes me want to give this 1/2 a star or less. It did keep me turning the pages and I know I would have been entertained and really liked this if I had read it as an early teen. Back then it would have been scandalous, and it probably still is. As an adult I'm wondering if V.C. Andrews really hated both sexes so much or is this some kind of sick joke. I ended up watching the lifetime movie after I finished this. It was meh. I'm glad that the movie cut out most of the child abuse. I'm not sure who I'd recommend this too. Probably co workers my own age so we can laugh about books we actually liked as kids and are know really embarrassed by. That's why the 3 star rating, but I'm disappointed in your taste 12 year old Deanna!
Like Reblog Comment

I understand that but this family was full of manipulators.  Jeesh!!! I was so confused, I didn't even know who to believe! This novel was pleasurable and disturbing at the same time.  I couldn't put it down though.  Lol. I'm actually ready to check out the sequel which doesn't come out until July, I think.  My only gripe was that it took a lot of pages to get a point that could have been reached in half the pages.  It really was not that big of a"wow" moment, it was a little predictable. But as I said it was entertaining.