Log in with Facebook
or
Wrong email address or username
Sign up
Already on BookLikes? Log in!
Incorrect verification code
Please, check your email, the code to access your BookLikes blog was sent to you already.
Enter code:
« Back Send
back to top
Search tags: Touchstone 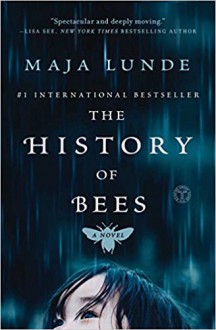 I'm putting this one on hold, actually, it's been on hold. I am having difficulty connecting to any of the characters and story lines. (All story lines are at a different time periods). I really thought I would like this book.

The story line follows bees, from farmers who built beehives and depended on bees, to people who hand pollinated flowers and more to ensure they bloomed and produced food since bees were extinct. I'm big on gardening, so i do love my bees and other pollinators flying around my yard. So I don't think it's the story itself. It is translated, but it seems to be a decent translation. But, the going back and forth between time frames and characters seems to be bothering me. Each section is short, but there's like 5 time frames the author is switching to and from. Kind of difficult to get to know the characters and follow each story line. 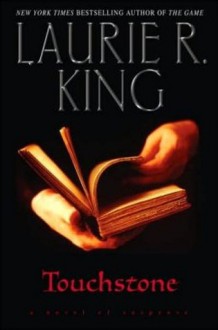 Effective period spy thriller. It seems to pick up on elements of her longer Holmes/Russell series, with Watson & Holmes type traits spread among the cast and an emphasis on discussing the woman's role(s) in society at the time.

Enjoyable and unexpected. In the style of classic literature, it has perhaps a bit more description than modern readers will be used to. Am I the only one who was bored with this book? Every scene was played out not once, not twice but several times. I guess to convey the tediousness, but it got to the point where it was too much. And for such a large book, the ending was abrupt to me. There should have been some kind of point where there's a next scene. In a small way there is but it wasn't enough for me. Average book so average rating. 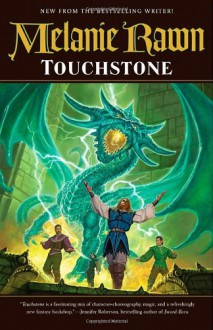 This is the first book in the Glass Thorns series and OF COURSE it ends with a cliffhanger and a bunch of unanswered questions!  Classic Rawn, that.  :)

Touchstone is set in an interesting world, peopled by different mythical races and racial mixes - I honestly don't think there was a 'pureblooded' anything in the whole book.  And that's kinda fascinating when you stop to think about it.  It's a medieval type setting with castles and archdukes and fairs and guilds and all that good stuff.  And travelling troupes of players that present their pieces using magic!   And it feels like everyone has at least a wee bit of magic from the mundane to the spectacular.

In Touchstone, we get the story of the forming of the theatrical troupe of four young men that ... now that I've finished it.... somewhat parallels the story of The Beatles.  Well, now that I'm sitting here writing this... it's far more than somewhat.  *LOL*   We have characters coming from poverty and broken homes.... we have youngster excess .. rocking the boat/status quo...  lots of booze, yes... we have drugs, yes... we have the threat of a woman destroying what the four have created.  We have the manager that comes in and guides the young men along their career path, taking care of logistical problems and concerns and their earnings and all that.. we have groupies!    There's the local bar where the troupe gets their start.  Oh yeah, now that I pause and actually think about it, SO MANY similarities!

The main characters, Cade and Mieka are very much John and Paul-like.  The brain and the soul respectively.  And not only do they seem totally made for each other in their art, it seems to me that there's a helluva lot of UST between them.  In fact, I spent the first half of the book wondering if by chance Mieka was really a girl or even transgender, which I suppose he could still be, but I don't think so.  I just now want Cade and Mieka to declare their love for each other and get it on.  *LOL*

So yeah... if you're into what could very well be Beatles AU fanfic done incredibly well... this could be for you.  :)    I know I'll have to pick up the second book now. 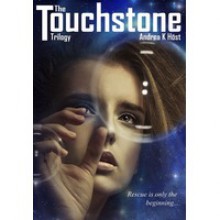 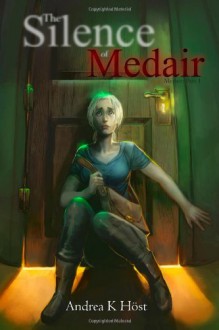 I’ve been on a bit of an Andrea K Host kick recently, first with Stray and then The Silence of Medair. (I read And All the Stars earlier this year and loved it.

Stray and Medair are quite different in overall sensibility. Stray is written as a diary, from the point of view of a teenage girl, and the worldbuilding is more science-fictional. Medair is told in tight third person, Medair’s age is not given but reads as perhaps mid to late twenties or early thirties, and it is definitely a fantasy (unless some bizarre explanation in the second book pushes it into SF).

And yet, both share this sense of dislocation, of being set out of time or out of space. Cassandra walks from Australia into another universe, Medair wakes five hundred years late. The bulk of both stories deals with the fall-out from this exile, both personally and politically. In a world that they don’t really understand (Cassandra more so than Medair), both characters must decide whether they will stay, whether they will cast in their lot and engage with this unfamiliar landscape or remain separate and alone.

In case it’s not clear, I thoroughly enjoyed both books. I’ve already started Voice of the Lost, and asked for Lab Rat One on inter-library loan.

It’s also true that both Cassandra and Medair spend quite a bit of their respective books reacting rather than acting, but this makes sense in the context of the story, and I never felt like they were passive characters. Of course, I’m more of a character-based reader than a plot-based reader, so books where the plot is “character coming to terms with their situation and themselves” doesn’t turn me off the way it would some people.

Stray begins with Cassandra’s notes after she steps through into a different world. It’s at times a slightly frustrating read because we’re so much in Cassandra’s timeline, and from the reader’s perspective something is clearly going to happen. However, once it does the pace picks up quite a bit. And I did appreciate that Host spends so much time on the mechanics of survival–Cassandra has less than Robinson Crusoe and modern life is much less suited to surviving when you’re suddenly pitched into a wilderness. Especially a wilderness full of completely unfamiliar fruit, which might save your life or might kill you.

Cassandra herself is a familiar and beloved kind of heroine. Bookish and nerdy, inward-gazing if not introverted, she has a strong moral compass and part of the strength of the book is the way she considers the consequences of her choices. She’s also not as boring as this makes her sound: her voice is clear and quite teenagerish, and I really enjoyed her sense of humor.

The sense of dislocation comes from the fact that her family has no idea where she has gone, that she can’t go back. She’s pitched into a strange world, with (slight spoiler) people she can’t at first understand and a society which is dramatically different from ours. And she has moments when she resists the situation she finds herself in, using Earth-based humor in a way the others won’t get. But I also suspect she is in some ways mis-reading situations and relationships in a wholly understandable and very human way. With lots of unresolved strands, this book certainly read as the first book in a trilogy, but in a “I have to read the next one now!” way.

Medair starts off much more in the middle of things, and gallops off from there. Medair, a Herald of Farrakkan, went in search of a legendary magical object to end the war her people were fighting. But she comes back five hundred years too late, the war long gone and the invaders thoroughly ensconced. When Medair rescues an Ibisian and has a geas put on her as a result, she must face the world she had retreated from, and decide what her place in it is.

Again, I’ve made that sound way too boring. I liked Cassandra a lot, but I really liked Medair. She’s older and a little sadder than Cassandra, without the burning sense of her own rightness to keep her going. And she struggles with her growing sense of the Ibisians as people, not simply the enemy she fought against (even that was complicated by her stay with the Ibisian ruler). Her ultimate choices didn’t surprise me, but they did leave me a very satisfied reader.

I’ll also note that I really enjoyed the worldbuilding here, the sense of history and politics, and the descriptions of landscapes and settings. Perhaps it’s just that I’m really a bit more of a fantasy reader but: I liked Stray a great deal, I loved Medair.

(As a complete side-note, I really like the covers for these books! One of my small gripes with self-publishing is that the quality of the covers is often not good [granted that is also sometimes true of big publishing houses, but it seems to be more often true of self-published books] and I appreciate that Host has put in the effort and money to have really quality covers for her books.)