Log in with Facebook
or
Wrong email address or username
Sign up
Already on BookLikes? Log in!
Incorrect verification code
Please, check your email, the code to access your BookLikes blog was sent to you already.
Enter code:
« Back Send
back to top
Search tags: melanie-hansen

Everything Changes by Melanie Hansen 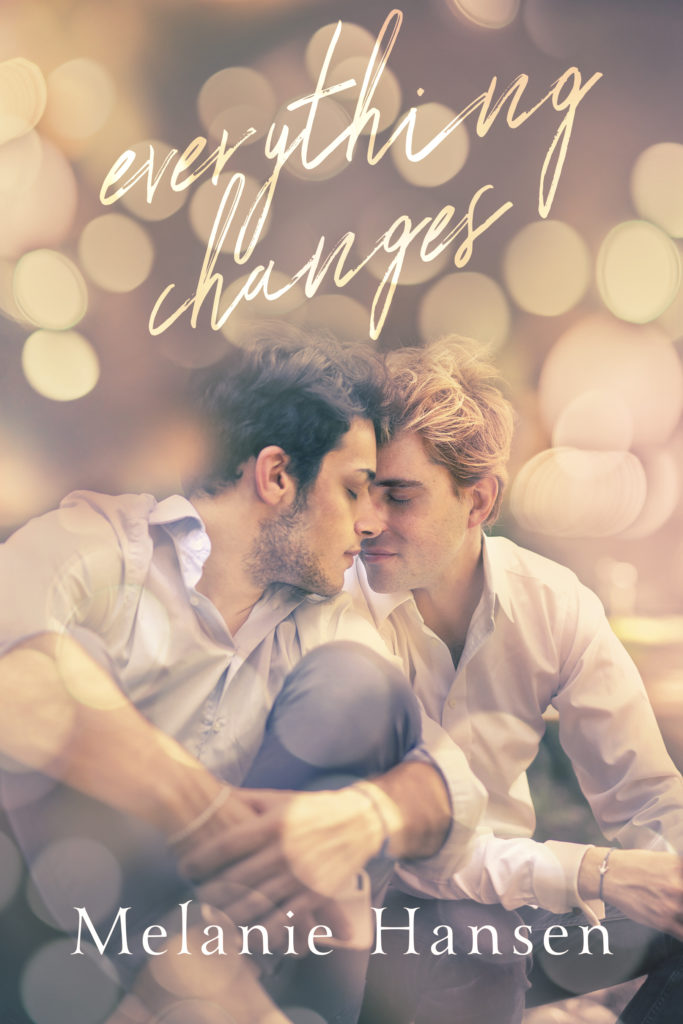 Available to Pre-Order at Amazon

A childhood in foster care taught Carey Everett to hold tight to what he has. Enlisting in the Marines gave him purpose, but a life-threatening injury ended his career—and took his leg. Now fully recovered, Carey’s happier than he’s ever been. He has a fulfilling job, a chosen family and, best of all, a cherished friendship with Jase DeSantis, the platoon medic who saved his life.

Jase knows how to take care of the people he loves. As the oldest of seven, and then a Navy corpsman, it’s what he was born to do. Still, he’s haunted by his actions overseas. Playing music with his band keeps the demons at bay, but it’s a battle he’s starting to lose.

After a week of sun and fun in San Diego, Jase and Carey’s connection takes an unexpected turn. With change comes a new set of challenges. For Jase, it means letting someone else into his deepest pain. For Carey, it’s realizing love doesn’t always equal loss. In order to make their relationship work, they’ll each have to come to terms with their pasts…

…or risk walking away from each other for good.

Pre-Order Your Copy on Amazon Today! Independent reviewer for Archaeolibrarian, I was gifted my copy of this book. This is book 2 in the Loving a Warrior series, but you don’t NEED to have read book one, Loving a Warrior, for this to make sense. But personally, I would recommend you do. Cos I loved that book, and Matt and Shane play a huge part here. Devon is trailing a path through a man’s world, a path she will not be veered from. But meeting Rhys, and how she connects with him on a very primal level, scares her a bit. When Devon’s full history comes clear, and Rhys’ too, their relationship takes the next step. Temporary, but NOT casual, right? I loved this book, but equally I struggled with it. I shall attempt to voice why! At times, I wanted to slap Rhys, I really did! He KNEW he was stringing his ex along, deep down he knew it, but he did nothing to stop it. He answered her calls, her messages, her crying down the phone, and pulled the string along a bit more. He KNEW he had to let her go. But then Devon comes into his life again. They met some 4 years before during an op. And here they are, working together again. And he doesn’t shut Lani down IMMEDIATELY! And I wanted to slap him some more. He DOES care for Devon, right from the start though, and that makes him really question what he had been doing. Devon’s trauma doesn’t come clear immediately, it kinda creeps out along the way. And it’s shocking, the level of betrayal she suffered, and it appears MANY women in the armed forces suffer. And I think this is what I found most difficult to deal with. How high up the food chain the covering up goes. Oh, no, this bit, THIS is what I struggled with the most! Matt and Shane play a HUGE part here. Granted, they spend most of the book either fighting or ignoring each other, trying to find what they really feel for each other but failing miserably. Matt, apparently, said something to Shane. WHAT was said was never explained, and I’ve been trying to recall if this happened in their book, but short of going back to reread (I don’t, nor do I have the time!) I will never know, and I wanted to! I loved the way Hanssen melds Loving a Warrior into Keeping a Warrior, not just because of Shane and Matt’s part here, but because of that other thing, the thing that I did NOT see coming! Had I read the two books back to back, I might have picked it up way WAAAAAAAAAAAAAAAAAAAAY right back at the beginning of the book, but I didn’t, and I was blown away by that little revelation! Both Devon and Rhys have a say, in the third person. I did not see any spelling or editing to spoil my reading, and I read this book in one sitting, not an easy or short read, but I could NOT put it down! Who is next? I dunno. Are there more in this series? I hope so! Oh please tell me there will be! It would be great if Matt, Shane, Devon and Rhys all take part too! Ms Hansen has 9 books (according to Goodreads) and now I’ve read 3. 3 very different, but still amazing books. I want to read the rest of them. I want to start at the beginning and work my way through. I want to follow the path of this author, cos she is on my hit list now!! 5 stars **same worded review will appear elsewhere**
romance friends to lovers Second chance romances darker grittier military police dudes over 18s 2019 reads archaeolibrarian 2019 5 star reads 2019 one sitting reads
Like Reblog Comment
show activity (+)

Devon Lowe is a survivor.

A survivor of war. Of combat. And of a betrayal by men she considered her brothers-in-arms. But her trailblazing work as a Cultural Support Team member working alongside the Navy SEALs is too important for her to back down now.

Fresh off a painful break-up, Air Force pararescueman Rhys Halloran recognizes Devon’s trauma for what it is—something that’s left her isolated, but far from irreparably damaged.

With Devon’s trust still lying shattered back in Afghanistan, putting her faith in a man who’s nursing a broken heart isn’t easy. But she’s tired of people making her feel weak, and Rhys makes her feel anything but, sparking a heated attraction that was never part of the plan.

With all eyes on Devon to prove herself in a brutal man’s world, having it all will mean putting her heart on the line like never before. But when it comes to Rhys, it’s an uphill battle she’s ready to fight.

Publisher’s Note: Keeping a Warrior deals with topics some readers may find difficult, including past sexual assault. Independent reviewer for Archaeolibrarian, I was gifted my copy of this book. Matt and Shane are in BUD/S training: an intense 6 months training to get them both into the Navy SEALS. They did not account for the intense chemistry between them, know that it can never happen while they are training, if they end up in the same unit. But neither can stay away from the other and anything worth fighting for is never going to be easy. After all, the only easy day was yesterday. This is only the second book of Ms Hansen I've read. Unquiet broke me, and I approached this one with kid gloves, because, I mean, she BROKE me before! And while THIS book isn't quite as emotionally devastating as Unquiet, it's still a very good read. Matt joined the BUD/S training to follow in his beloved uncle's footsteps. Shane joins after spending time in the Marines, but his REAL reason doesn't come clear til much later. Neither wanted a relationship, and after graduation they were gonna get this. . . . whatever it is between them. . . out their system. But emotions have a way of coming out of left field, and Shane admits he wants MORE. This book is quite heavy on the physical and emotional aspect of this kind of training. And at first, I didn't like it too much. BUT as the book moved along with Shane and Matt's relationship, I found myself thinking that aspect is really rather needed. It goes deeper than running the fastest mile, or swimming the longest, or finishing that O course in the quickest time. It goes deep within Matt and Shane, and how far they have to dig to get what they. To get WHO they want. It's told well, from both men's point of view, and I wasn't sure that would be the case at first, so when Shane gets his voice, I was happy. Ya'll KNOW how happy I am when everyone important gets a voice! I didn't find it overly explicit, but it wasn't needed here. It's well over half way before Matt and Shane get to the main event, but the build up to that was great reading. It pitters and patters along, a little more here and there, til they finally decide to let their feelings run free. And it was glorious! Some secrets revealed that I saw coming, and some not. There is a second book, Keeping A Warrior in this series, and at first I thought it a follow on to this but it's not. It's about a character who pops up here, and I would like to read it. Especially after what happens to him here, and reading the blurb of THAT book, it ain't gonna end well! A solid . . . 4 star star read P.s That tag line " The only easy day was yesterday"?? Gonna stick with me a while! **same worded review will appear elsewhere**
romance male male military police dudes 2018 reads 4 star reads 2018 archaeolibrarian 2018
More posts
Your Dashboard view:
All Reviews Text Photo Quote Video URL Activities
Liked posts Top Tags
Press About Terms of Services Privacy Policy Contact Us Blog FAQ Patronaty medialne BookLikes for Authors Partners panel more...
Team Themes Docs API Blogs
Copyright © 2022 BookLikes