Log in with Facebook
or
Wrong email address or username
Sign up
Already on BookLikes? Log in!
Incorrect verification code
Please, check your email, the code to access your BookLikes blog was sent to you already.
Enter code:
« Back Send
back to top
Search tags: sarah-andersen 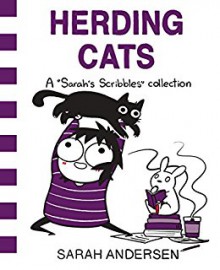 As usual I loved the first half of the book, the second half, not so much. While it still have relatable and lovable cartoons the audience for the second half of the book was artists and I just didn’t connect with it. Also a lot of the information was given in paragraphs as opposed to comics which is well and fine and I’m sure gave useful content but is not what I visit these books for. However, as I said in the beginning, I loved the book up until the second half started. The comics are relatable to a broad group and so so funny. 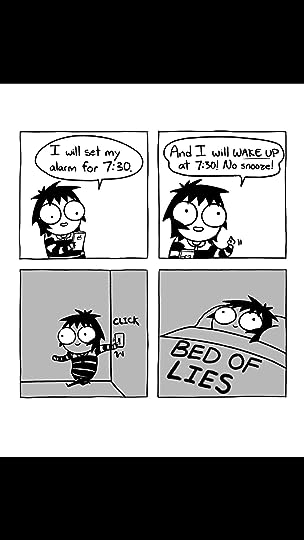 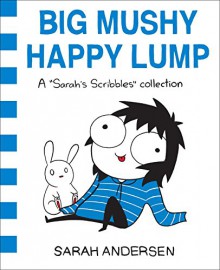 A great collection of relatable comics from Sarah Andersen. Ms Andersen spends more time talking directly to the reader in this one than in Adulthood is a Myth and I’m not sure I connected fully with it.

These books are feel good fun and I’m happy to already have my hands on the third installment.

It’s nice to know where the famed “ball out in the book store” comic is actually published. 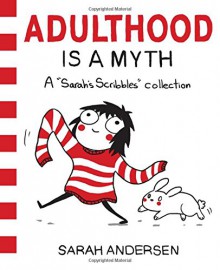 Adulthood is a Myth by Sarah Andersen marks the beginning of her illustrated web comic being released in book format. Andersen's art is full of humor about her day-to-day life as a single lady who'd rather stay at home than socialize. [A/N: If you're not into jokes about menstruation then this isn't the book for you.] A lot of her jokes focus on how she doesn't want kids, in general doesn't like people, and prefers to stay at home to eat and sleep. (Some of these things seem eerily familiar to me...) Her art style is quite cartoon-y and definitely keeps the feel of her beginnings as an Internet comics artist (in the best way possible).

Her sequel, Big Mushy Happy Lump, showcases relatable female humor at its best. She really leans into the jokes examining her introverted/socially awkward personality traits. She added an end section to this book where she talks directly to the reader about how she feels/acts in social situations. She also discusses at length why she's a sweater thief forever and always. It's really cute and I think it's a great way to connect more with her audience.

And finally there's Andersen's Herding Cats which (surprise surprise) features a lot of cat comics. In Big Mushy Happy Lump Sarah talks about how she has never been a 'pet' person but after she cat-sit for her mom this completely changed and this book examines her obsession with all things feline. This book has a phenomenal end section about navigating the Internet as an artist. Biggest takeaway: Keep making art.

What's Up Next: Excellent Books for Early and Eager Readers by Kathleen T. Isaacs 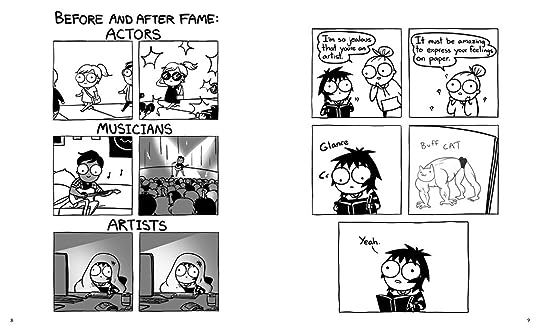 I would like to thank NetGalley and Andrews McMeel Publishing, LLC for providing me a copy of this book in exchange for an honest review.

I have been hearing so many good things about Sarah Andersen’s popular “Scribbles” series and yet, I was not able to pick up any of her books when they were coming out. Well, now I finally got the chance to pick up one of her books through NetGalley, which is the third book in the series called “Herding Cats” and I was quite amazed by the humorous antics shown in this book!

In this volume, Sarah shows her experiences in both real life and the internet life through her artwork (or scribbles as they are known as) to relate to the readers such as trying to get through one page in a book only to keep on reading the book even after you promised yourself to just read one more page or seeing some progress happen in the United States only for the 2016 elections to cause mayhem afterwards.

Sarah Andersen’s writing: Wow! I was quite amazed by how Sarah Andersen wrote this graphic novel series! I loved the way that Sarah Andersen relates her observations about real life both through her life and through the internet in a humorous yet thought provoking way as I found myself agreeing with a majority of her thoughts about real-life. I really loved the part about the 2016 elections as it was stated in one of the panels about how politics was making progress before 2016 and then the 2016 elections hit and there was chaos and mayhem! I was also impressed with the fact that this graphic novel series is similar to Allie Brosh’s series “Hyperbole and a Half” as both series have the authors relating their own lives through their artwork and both are done in a hilarious way! I also loved the fact that Sarah Andersen provided some advice at the end of the book about how to deal with the pressures of both the real world and the internet community and how if you encounter some struggles in your life, just keep on creating things that you love (in Sarah Andersen’s case, it is continuing to draw her comics no matter how hard things get in both the real world and the internet community).

Sarah Andersen’s artwork: Sarah Andersen’s artwork is truly hilarious to look at as the characters are drawn in a squat comic book fashion and I especially love the images of Sarah herself as she is drawn as having spiky hair and is wearing a black and white striped shirt. I also loved how Sarah Andersen conveyed some of the situations in real life through the images such as the state of politics being shown as a person with an American flag shaped head and then the next panel shows lots of people fighting each other in a fiery landscape after the results of the 2016 elections. 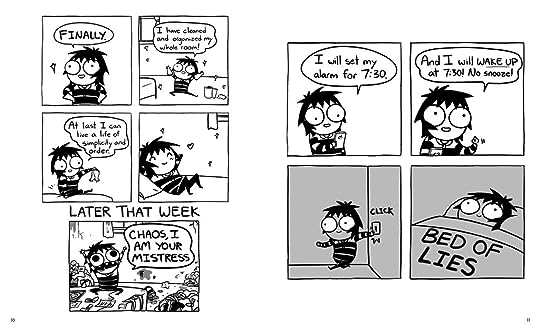 The reason I took off half a point from the rating was because I felt that the story telling was a bit disjointed at times and it was hard for me to really follow what is really going on in the story, even though this is meant to take on different aspects of real life and put them in comic book format.

Overall, “Herding Cats: A Sarah Scribbles Collection” is a truly hilarious graphic novel to read, especially if you want to see a more humorous take on real life!

If anyone were to ask me about my life this book would be a great approximation.