Log in with Facebook
or
Wrong email address or username
Sign up
Already on BookLikes? Log in!
Incorrect verification code
Please, check your email, the code to access your BookLikes blog was sent to you already.
Enter code:
« Back Send
back to top
Search tags: Play-of-Passion “You broke my heart when you said I didn't know about foreplay."

Her lips twitched. "Yes, you're terrible at sex. Terrible."

I think this will always be my least favourite and I honestly think that has to do with the fact that it's in my way of Hawke and Sienna. This is a good book, it really is, even with Indigo's constant blabbering on about dominance. I'm just impatient and I think nine books is just too much of a wait for me. Eight I could have done. Nine is like torture. I still love Drew though!
_______________________________________

And so here we are, back with the Changelings and it's the SnowDancers no less. How exciting right?

This is definitely the weakest of all the Psy/Changeling books. It breaks my heart to say that but they can't all be winners right?

'Play of Passion' kind of starts off at a disadvantage, it is reintroducing us to the Changeling's and setting up what really is one of the most anticipated books in the series. I just kind of wanted it to be over so I could get to 'Kiss of Snow'

My biggest problem however was Indigo, for 90% of the book she annoyed the heart and soul out of me. Good lord, she went on and on and on about being a dominant female, how her wolf wouldn't accept someone like Drew, how much younger he was (A WHOLE 4 YEARS), he wasn't dominant enough, he was too dominant, she didn't know where he really stood in the hierarchy, he was thinking too possessively.

The plus side to Indigo's madness was that Drew was the one who was causing it, he was fantastic and funny and the reason this book does not get a lower rating.
Drew, baby:

Once the amazing Drew manages to get Indy to chill out a little, things do begin to improve, the problem is, it takes most of the book for that to happen.

When all is said and done though, this book is important, it sets up what is to come in the war on Silence and Pure Psy and it gives us a very brief glimpse into Sienna and Hawke's relationship, just enough to leave you begging for more. 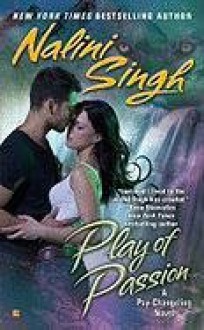 In his position as tracker for the SnowDancer pack, it’s up to Drew Kincaid to rein in rogue changelings who have lost control of their animal halves- even if it means killing those who have gone too far. But nothing in his life has prepared him for the battle he must now wage to win the heart of a woman who makes his body ignite… and who threatens to enslave his wolf.

Lieutenant Indigo Riviere doesn’t easily allow skin privileges, especially of the sensual kind- and the last person she expects to find herself craving is the most wickedly playful male in the den. Everything she knows tells her to pull back before the flames burn them both to ash… but she hasn’t counted on Drew’s will.

Now, two of SnowDancer’s most stubborn wolves find themselves playing a hot, sexy game even as lethal danger stalks the very place they call home.

Play of Passion is book nine in the Psy-Changeling series by Nalini Singh. This is Drew and Indigo’s story. I never would have put them together, but it worked perfectly. This book focuses solely on the SnowDancer wolves and not DarkRiver cats. I love DarkRiver, they have Clay, Lucas, and Vaughn, but I might be changing over to SnowDancer after this. Thous Kincaid men and with Hawke’s book coming. Eeee! <fan girl squeal>

I love Drew. He’s quick to laugh and loved by the pack. He’s genuinely cares about each person and it comes through. Indigo on the other hand I had mixed feelings for. I like a strong independent kick ass female, but she complained a little too much that she need a dominate male, but when Drew got his dominance on she would get angry. What I really liked in this story is the romance. It was different from the other books; in that it was more playful. The mating dance/courtship was fabulously done. Every girl should have a man in their life who courts like Drew.

We also see that Silence is continuing to breakdown and both sides are gearing up for a war against the Pure Psy. New and interesting alliances are being made. I have enjoyed getting to see more of Hawke. Oh god Ms. Singh has been building his story from the get go and I am soooooo looking forward to it.

Play of Passion is a wonderful read in the Psy-Changeling series. Things keep developing and more and more characters are being introduced. If you have not picked up this series I highly recommend you do. Nalini Singh is an amazing writer and story teller. You will be taken on a interesting adventure into DarkRiver, SnowDancer and Psy world.

I liked this book more than I thought I would've. I say that because I haven't liked every book in this series. I am noticing that the further I read in this series, the better the books are getting. I really liked the dynamic between Indigo & Drew. I liked the cat & mouse game they played with each other. Drew is one hot sexy wolf! Indy is also a very strong, dominant, badass woman/wolf. I did get a little bored though in the middle of the book but, it did pick back up for me & I was disappointed when it ended. There wasn't as much Psy action in this book and for me that aspect was missing a little. I did love we got a lot more of Hawk in this book. Part of me agrees that this term should be eased out of use but the other part of me still finds it useful as one color (or really a set of hues) on the spectrum of gender. And then there is a spectrum (not speculum) of tomboyish itself and then again there is the prism in which in  otherwise girlie girl (another fun term) glints the rainbow shine of the tomboy some where within all that moisturizing.

So, in Western cultures as tomboy is: A woman or girl  who behaves or dresses in the way boys or men are traditionally expected to at least in some aspects (jobs, sports, hobbies, attitudes), Typically wears jeans, baseball caps, and and has a very low maintenance beauty regime if any.  Often brought up with a lot of brothers or a child of a single father.

This identity is not particularly about sexual preference in Western culture.  There is Venn diagram I could draw if I was feeling it but right now I don't want to launch into a a Gender Studies lecture.

I, of course, was a tomboy. I didn't grow out it of really. Tree climbing, fencing, dirt, jeans, car repair, low maintain beauty routine.  I just where leggings under my skirts now.

So, here are my favorite Paranormal Tomboys!

3. A Tale of Two Dragons by G.A. Aiken, Braith of the Darkness

Did I not name your favorite? Let me know!

To vote for the best of the best, go to the Goodreads list: Paranormal Romance Tomboy Heroines.

To see recommendations from all genres of Romance and some amazing Tomboys, check out my Pinterest Board: Tomboys in Romance Novels.