Log in with Facebook
or
Wrong email address or username
Sign up
Already on BookLikes? Log in!
Incorrect verification code
Please, check your email, the code to access your BookLikes blog was sent to you already.
Enter code:
« Back Send
back to top
Search tags: Sourcebooks-Casablanca 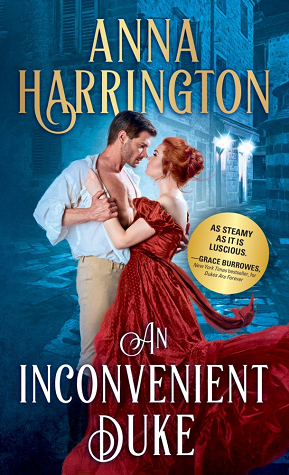 Lords of the Armory #1, This is a wonderful first book of the series setting up the characters and the ominous big bad, that I have a feeling is going to be the connection of the series. This is a standalone there is a HEA and all question are answered except for who is the big bad. It's a fun read with plenty of humor, sexy time, and a nice bit of realism.

Danielle is head of the Nightingale operation, in a time where a husband could be arrested for beating his wife but it wasn't exactly against the law either and all it did was shine a bad light on the woman. Dani helped those women escape, get new identities and a new life away from their abuser. Dani knew her limits she never messed with the brothels because they were dangerous. Her best friends Elise wanted to help those women and going out on her own she crossed the wrong people and ended up dead.

Marcus Braddock had been away at war , his homecoming gave him a heroes welcome and a Dukedom, the newly christened Duke of Hampton. Marcus believed the story he was told about his sister's death but upon his return he discovered it was a lie, she had a secret and the only way to find out what it was is to ask her best friend and the woman who told him the lie, Dani. In the time it has been since he last saw her Dani had grown into a stunning woman and his reason for getting close to her multiply one to find out about his sister and two just to be near her and when he finds out her secret he's determined to protect her too. Tempers flair and passion ignites as Dani and Marcus try to uncover who had Elise killed and save Dani from the same fate.

Overall, a great read. I love how it didn't take Marcus long to realize he loved Dani. I liked how the Armory came together. It was a well written, nicely paced story and steamy. I look forward to the rest of the series.

Despite what it may say I really don't think this book is a stand alone. It is part of Marie Harte's McCauley Universe which basically includes The Donnigan's, The Body Shop Bad Boys, and Veteran Movers. In my opinion if you've read at least one of the Body Shop Bad Boys series, The Only Thing, and What to Do With a Bad Boy (which is Del's book and I love it) I think you can read it without getting lost in the secondary characters. Rena and Axel have been on the sidelines for a while now, a year in there time several books our time, and they have been interested in each other but for reasons of his own Axel hasn't made a move.

It's been six months since Axel's mother died and the New Year just happened and with Valentines  along with her uncles wedding around the corner Rena has decided Axel is never going to make his move and she, a hopeless romantic, is ready to find her forever person. When Axel hears that Rena is going to start actively searching for a boyfriend and a commitment he finally gets shaken out of his low self esteem long enough to ask her out, well she says no. And so the bet.

Two dates is all Axel has to convince her to take him seriously and after two dates she agrees to give him until Valentines and then she'll make up her mind. Axel planned it all from a gift everyday, no matter how weird the gift might be, and nights out and nights in. Axel is adorkable when it comes to dating. Unfortunately Rena who has finally achieved her dream of owning her own salon is faced with a bunch of racist dummkopfs but she has all her friends to help out including, what I hope is hero baiting, a bunch of hunky firemen. (please tell me they are going to get there own series) Axel is also dealing with a bunch of stuff, his father and his brother are going to be visiting and all of Axel's insecurities of why he took so long to ask Rena out are exposed and it just might be the downfall of their relationship.

Overall, it was a good read. My only real issue was the cover, it's a cute cover just not for this book. I don't think the cover matches the book at all. When I see illustrated covers like this I think Rom-Com, chick-lit type stuff and this book just isn't that. Yes there is humor in this romance but Marie Harte always deals with more the angst of internal struggle and people overcoming whatever is holding them back from embracing their HEA, the humor just lightens it up a bit.

Seven Range Shifters #3, This one is my favorite of the three so far. I knew I would love Rogue and Maeve. I loved that they had history, even if Mae doesn't know it at first. The romance between them definitely has some Beauty and the Beast like qualities. I think this can be read as a standalone but I would at least recommend reading book #2 even though certain events are mentioned and explained book two is where it happens so you get the full story, if I remember correctly.

Maeve is once again the target of the vampires, her blood was used to create a serum so that the vampires could drink from the shifter and now the vampires want her dead so an antidote can't be made. Rogue's plan is to hide her away safe from everyone while they track down the scientist who created the serum in the first place and have him make the antidote. Mae reluctantly agree for the safety of her pack. She doesn't trust Rogue especially since she has an undeniable attraction to him. Rogue has always loved Mae, even before he became Rogue, not that Mae recognizes him anymore, and he plans to keep it that way until necessary. But the longer she's on his ranch the more she worms her way into his heart and the hearts of his people.

Overall, I think this one was paced better than the previous books. I loved all the characters, I felt a connection for both Rogue and Maeve, loved the secondary characters especially the kids. I'm really getting into the series I can't wait to find out what happens next.

Black Ops Confidential #3, An absolutely gripping story, from start to finish it is unputdownable. Tony and Honor are great characters you really feel for them and root for them. I love how at the beginning of each of these books the Parrish Family always seems like it's bad but as the book goes own the perception of the family changes as the main character learns the truth. Tony faked his own death to avoid punishment for something he did and he thought he didn't deserve it, they memory wiped his sister and he didn't want those memories taken from him. So he's been sailing around his latest port is Dominica, a small island in the Caribbean, that's where he meets Honor.

Honor is the daughter of a movie star turned activist. Honor was looking for a distraction from the anniversary of her mother's death when she saw a kiteboarder wipe out. She was always the cautious one the safe one but when she saw the kiteboarder hit some rocks she didn't give a second thought to going in after him. Tony was instantly swept away by her but seeing that Tony Parrish was dead he told her he was Lazarus Graves, he even told her a half truth he was running away from family and had changed his name. Tony really should have kept on sailing but Honor asked a favor and he didn't want to let her down, he didn't want to leave her; it then became obvious that Honor was in trouble and needed his help and he really didn't want to leave her. By the time the family had tracked him down he was so in love with Honor and she was in so much danger he would risk getting caught by his sisters to save her.

Honor inherited her families cocoa farm, when she moved to the island after her mother died she decided to run an adventure tour on the cocoa farm. Someone has recently been trying to buy it she keeps refusing to sell and recently a series of accidents have her business being threatened. Tony is doing his best to help around with tours and teaching her self defence whenever they aren't having sex. Once they figure out what's happening and the threat has escalated Tony is willing to turn himself into the family just to safe Honor.

Overall, I loved this read. It's a great series that you can read as a stand alone. There was probably more sex in this book than the others, so depending on if you like that or not, I found myself just skimming those parts after the third it just felt like filler after that. But the story was exciting and I love the Parrish family and Tony is so broken it was nice to see Honor not quite fix him but make face his past and the truth and turn out better for it. Honor is a great character she is so much stronger than she realizes. I can't wait for more, this series is awesome.