Log in with Facebook
or
Wrong email address or username
Sign up
Already on BookLikes? Log in!
Incorrect verification code
Please, check your email, the code to access your BookLikes blog was sent to you already.
Enter code:
« Back Send
back to top
Search tags: source-netgalley Sunshine Vicram is back where she grew up. Coming home again is not all sweet apple pie though. Sunshine has somehow been elected Sheriff of Del Sol, New Mexico. While she has no idea how that happened in her absence, she strongly suspect her parents are behind it. In any case, she has to take on the job to serve and protect. However, she’s failing on the protect front when a teenage girl goes missing and Sunshine suspects a kidnapper is on the loose. While organizing a manhunt she has to deal with a multitude of other wacky small town shenanigans. And cursed muffins. Who says you can’t go home again?

If you are a fan of the Charley Davidson series then look no further. This series has everything that is awesome about Charley. Well, except it only has a little of the paranormal stuff. Just a hint. But otherwise it’s all action, humor, and suspense. I love it. Sunshine is a great character, her daughter Auri is adorable, her parents are great, secondary characters shine, and there are a couple of hunky hunks for some bubbling sexual tension. Yum. Pick this one up then strap yourself in because you’re in for a fast and exciting twisty turny ride. DS Josie Masters has had a terrible year but at least she saved her young nephew after he was kidnapped by a killer clown. Yeah. I don’t know what that story is about because I missed book 1, but I intend to go back and read it. Now Josie is working on some missing persons cases that are starting to look like more than just a missing persons issue and now her supervisor is pulling her off the cases when it appears that there is some kind of connection to her. What the heck is going on?

Well-written and twisty enough for any mystery enthusiast this tale kept me glued to my seat. Josie is flawed and yet a great detective. Does she make some questionable choices? Oh, hell yeah. Do I want to slap her upside the head sometimes? Definitely. But I like her anyway. Secondary characters are great and the world is interesting. I need to go back and read book 1 and then I’ll be all set for a book 3 with Josie and the crew. Ever since her brother was wrongfully arrested, convicted, and sent to prison, Rachel Wainwright has fought for those she feels gets shafted by Lady Justice. As a public defender she gets a lot of those cases and she gets the occasional Innocence Project client, too. She has taken on the 30-year-old case of Jeb Jones, a man put away for murder. He has steadfastly declared his innocence and has been petitioning for his DNA to be tested for over a decade and getting nowhere. Enter the Innocence Project and Rachel. Does she think he’s innocent? It’s not up to her. Her job is to get the DNA tested now that such a test is available. After that? Well, one step at a time.

Detective Derek Morgan inherited the case from his late father. The Jeb Jones case is the one that made his dad’s career so he’s understandably pissed that the DNA test is calling his dad’s integrity into question. But the law is the law, so he sent it in. And the wait for results begins. In the meantime, he has cases to solve, including the brutal bludgeoning murder of an aspiring singer. But that’s not the only murder he’ll need to solve as bodies start dropping like flies and the only connection he can find is Rachel Wainwright. Uh, oh…

This is one hell of a twisty turny tale! It held my attention from the first chapter all the way to the end. I even stayed up way past my bedtime trying to finish it. That’s a rare thing for me since I love my sleep. The characters are awesome, the world is great, the killer is…whew, what a mess. The mystery is one that kept me guessing. I had started to glean a few half-formed inklings at about the 60% mark, but not nearly enough to state with any certainty who I thought was the murderer. Great job! This is one of my favorite reads of 2019. I’m looking forward to continuing with this series even though I’ve already read book 4 by accident. Luckily, my memory sucks ass and I didn’t remember it until after I was finished with this one. I hate reading books out of order. lol 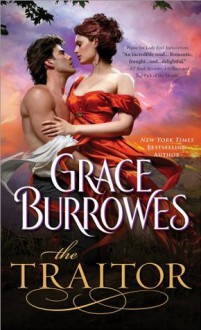 Baron Sebastian St. Clair was stuck between a rock and a hard place. As a boy he and his family visited family in France and then got stranded there when Napoleon went apeshit and the war started. His father slipped back to England but died during the war. Then his mother died. In order to protect his French relations, Sebastian had to join the French army as Robert Girard, in charge of a chateau where they tortured prisoners to get information out of them. English prisoners. Of which Sebastian could claim half his ancestry. When the war was over, England pardoned the torturer St. Clair, and, as the last remaining male heir, he was told to take up the barony and get to work. He was trying to live a quiet life and do just that, but The Traitor Baron kept being challenged to duels by the very peers he tortured during the war. Would there be no peace for him? Enter Miss Millicent Danforth, a poor relation turned paid companion. His only remaining relative, his elderly Aunt Freddie, had gone through quite a string of paid companions before she hires Milly. And the story is off and running…

After having read book 1, The Captive, I have to say I came into this story with grave doubts that the author could turn the torturer from it into a hero. I was wrong. Sebastian is a complicated tortured soul himself. What he has done haunts him. Not just because he had to torture his peers, but the circumstances that brought him to it. He’s flawed, but redeemable. Milly isn’t without her demons. She’s a great character and perfect for Sebastian. The story is complicated and layered and one of the best reads of 2019 for me. Hell, it ranks up there with my all-time favorites. Bravo!