Log in with Facebook
or
Wrong email address or username
Sign up
Already on BookLikes? Log in!
Incorrect verification code
Please, check your email, the code to access your BookLikes blog was sent to you already.
Enter code:
« Back Send
back to top
Search tags: willow-winters 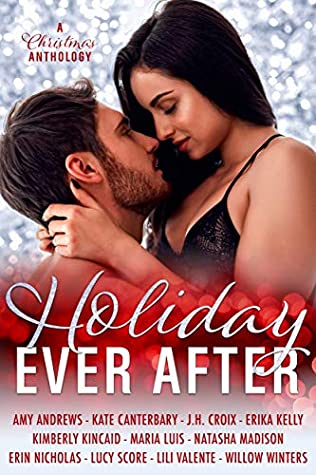 Holiday Ever After Anthology
Eleven sweet and sexy holiday stories from New York Times and USA Today best-selling authors! Grab a cup of cocoa and curl up with this collection that will warm your heart and curl your toes.
Each story is a new standalone contemporary romance set within popular series, with no spoilers, no cliffhangers, never-before-featured couples, and hot happy endings. This anthology of quick reads (each can be read in an hour or so) will only be available as a collection for a very limited time. Naughty never looked so nice!
Featuring
Kimberly Kincaid
Amy Andrews
J.H. Croix
Kate Canterbary
Erika Kelly
Maria Luis
Natasha Madison
Erin Nicholas
Lucy Score
Lili Valente
Willow Winters
Add to Goodreads: http://bit.ly/33CB4Uu

Such a fun collection of novellas. I definitely had some favorites like Kimberly Kincaid and Amy Andrews but all of them good holiday romance. There was one in particular it  started so well but the ending was rushed I really wish it was full length I would have loved to read it. These are not your Hallmark Christmas Romances, nope these are definitely on the naughty list some of the things these couples get into, woooo, it's enough to warm you up on a cold night.
Baby, It's Cold Outside by Kimberly Kincaid part of her Remington Medical series, so good.
Planes, Trains, and Head Over Heels by Erika Kelly the princess and the pilot not normally my thing but a nice read.
That Snowy Night by J.H. Croix summer camp romance years ago and a chance meeting on the side of an Alaskan road.
Itsy Bitsy Teenie Weenie Red Bikini Trouble by Amy Andrews a fun and quick read a second chance romance all thanks to a red bikini in the middle of a Colorado winter.
The Mistletoe Kisser by Lucy Score a Blue Moon Winter Solstice story troublesome matchmakers try and set up the town vet with the wrong man.
MILF on the Shelf by Lili Valente I wish it was full length I liked it but was very unhappy when it ended too soon. Can a busy single mom who is almost 40 find true love in Manhattan, she just might.
Must Love Alligators by Erin Nicholas Boys of the Bayou Christmas two side characters from the series get there own chance at a Bayou HEA. Such a fun read.
Tempt the Assistant by Natasha Madison two haters of Christmas a boss and his assistant finally admit feeling, a good read one of my favorites in this anthology.
All I Want is a Kiss by Willow Winters two people who have had a long standing affair get the chance at a true HEA. I need more Willow Winters in my life.
Professional Development by Kate Canterbary enemies to lovers romance where two teachers are forced together only to admit their real feeling. I liked the beginning and the end wish there was more to the story, another one I wish was full length.
Kissing the Gentleman by Maria Luis a Cajun New Orleans Christmas where two people learn to see eye to eye on a culture they both love and admit they love each other. Another one of my favorites. This book contained the prequel “Something to Remember”. This was a dark story, about abuse and the violence it breeds. There is an HEA involved, it is twisted but is gained at the end.  A lot of emotional and mental baggage to work around. Not really my favorite type of story. Don't let the title fool you, or at least, don't let it scare you away. This book is important. It's timely. It's cathartic. It can be many things to many people. It made me laugh and cry, it drove me to anger, and I even got a little frustrated, but I was never apathetic.

She Asked for It starts with a short prologue five years in the past, where Allison and Dean both have life-changing incidents that start them on a path towards each other. Then we flash to the present day, where they can't deny an attraction to each other when they see each other at college - even though Allison definitely doesn't need Dean in her life.

They fall into a relationship that's push/pull at best, and agonizingly painful at worst. When they're tested, it could go to hell in the worst way possible, and they have to find out if they can make their way through the fire without getting singed.

Dean is the quintessential tortured, angry boy. A mother who tosses him aside because she cares more for a wealthy husband, a school system that doesn't give a crap about him, he learns that there's nobody he can count on, and everybody leaves. So he leaves first. But for Allison? He wants to stay.

The way the light hits her hair, the way she blinks away the tears that threaten to fall. The way she smiles up at me with the sound of some movie playing on the television in the background. Some moments are burned into your memory forever, and maybe it’s because deep inside we wish it could stay like this. With her nestled into my arms, knowing she’s safe and that nothing bad is going to happen tonight. Not tonight.

On the other hand, Allison had a pretty normal life until an earth-shattering moment in time shook her world. She made a promise, and she was determined to keep it. Later on, an opportunity fell into her lap to keep that promise, so she had to take it.

Allison's promise and Dean's attraction aren't exactly working in cooperation with each other, so the issue is overcoming all of the demons that chase them, and all the things in their pasts that have made them what they are.

I loved this book, and I especially dug that it was fully self-contained with no cliffhanger.

This book picks up where we left off in [b:Damaged|36177314|Damaged (Sins and Secrets Series of Duets Book 3)|Willow Winters|https://images.gr-assets.com/books/1504486234s/36177314.jpg|57707854], Evan behind bars and Kat learning that she's pregnant and alone. In some ways, it felt like I was in the middle of a superhero tale - where the selfless hero denies his love in order to protect her from the evil-doers who will harm her if they know it will torture the un-hurtable super.

In this case however, they're all just flesh and blood humans. And the bad guys already know that Kat is Evan's weak spot - separated or not. This was one of my main nits with this book. Subverted somewhat by the protection she was given at several times in the story, but IMO, not quite enough for my tastes.

Kat and Evan kept doing the same dance throughout. Evan can't stay away, Kat keeps giving in. And I use "giving in" for a reason. I really wanted her to have more backbone. I was also pretty peeved at her for some other stuff that happened, because wishy-washy much? kissing Jacob

I'm not saying the book isn't good, because it is. I thoroughly enjoyed reading it, but at times it was frustrating. I don't mind red herrings, character dances, lies for safety sake, and secret love-fests, I just wish these two books were condensed into one - or there was a little less of the push/pull keep-away dance.

On the bright side, and yes there is one, I love Willow Winters' work, and her writing is what brings me back for more.

I give this one 3 "instances of stumbling onto evidence" stars