Log in with Facebook
or
Wrong email address or username
Sign up
Already on BookLikes? Log in!
Incorrect verification code
Please, check your email, the code to access your BookLikes blog was sent to you already.
Enter code:
« Back Send
back to top
Search tags: Dare-to-Resist Austin is not just a former football player, he is a sports agent in his own right.  He is also a devoted family man despite the player reputation.  He cares enough to give a kidney - that shows how much his family means to him.

Quinn is excited to work for such a sports legend.  She knows she will learn much, and is actually shocked to be hired.  When the temptaion of her boss gets harder, she is not sure she can resist.  Until he needs her even more......

There are so many things I want to tell you about this story.  I am not a spoiler though, so here it is: read the book.  This was just really romance goodness from start to finish.  The attraction was strong with heat, that turned up rather quickly.  The main characters were passionate and caring. The pace was not too slow, but pretty steady.  Overall a great book to grab and read. I couldn't put this down!  I give this a 5/5 Kitty's Paws UP!

Phillips dares to give the heart what it wants. A refresher course on all things Dare. The family we all know and love is back to set the senses aflame. Dare to Resist sports a different kind of family, but there's more than enough temptation to go around. Austin and Quinn are a blank canvas that emotions are waiting to explore. Surprise revelations, familiar faces and an introduction to some brand new friends. Austin has quite a legacy to live up to and believe you me, he proves himself to be up to the task. There haven't been many of those in my life lately.

This is the story of how Kady Dresco and Colton Briggs who, after years of pent-up sexual tension, finally gave in to their desire.

Three years ago, Kady and Colton shared a scorching hot moment in the pool house after he returned from the military. Now, trapped in a raunchy motel for two days after a monsoon led to the canceling of their flights, they won't be able to resist their repressed needs for much longer.

Yup, Kady is Colton's best friend's little sister. And there are lots of guilty feelings associated with that.

Everything felt believable and real, despite the short-length of the book (or novella, I don't know). That was amazingly refreshing. Because of that, and even though each installment is written by a different author, I'll continue on reading this series. Here's hoping they're as good as "Dare to Resist"! 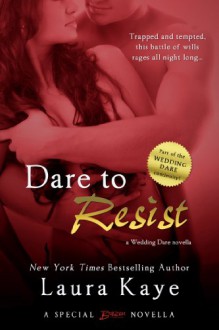 I like character driven stories with substance and deep emotion as a rule. Give me 250-300 pages of tension and/or heart-pounding drama and I'm a happy girl.  But sometimes I need a break from that so just want a story with some easy romance and steam between the hero and heroine.

The Wedding Dare series hit the spot! Each book is a quick novella length story by authors I know and love. Some I liked more than others, but overall, a very enjoyable series that you can read back-to-back on a rainy Saturday (like me) or while sitting on the beach.

The series starts with Kady and Colton in Dare to Resist who have known each other the better part of their lives.  Kady is Colton's best friend's little sister.  While Kady has been nursing a crush on Colton since childhood, Colton is very much attracted to Kady, but he's been very careful to keep his distance since Kady's come of age because 1) thou shalt not touch his best friend's sister, 2) there's a 6 year age difference between them and 3) Colton's sexual tastes aren't on the agenda for good girls like Kady.  But one night 3 years ago, Colton's resolve slipped and he and Kady shared a very hot moment that neither have been able to forget since.

Kady and Colton get stranded together and have to share a room which makes it impossible for them to resist their attraction to each other.  Although this book is on the shorter side, there's great banter and humor in addition to the hot sexy time.  The drama factor is pretty low but when things do get murky between them, they talk it out like mature adults.  There's a HFN ending here, but we know where this is going as it's Kady and Colton's destination wedding that brings together their friends for the next 4 books of the Wedding Dare series.  4.5 stars

At Kady's bachelorette party, her bridesmaids dare each other to bag a groomsman while at the resort for the week prior to the wedding...Let the fun begin!

Falling for the Groomsman - 4 stars

Eight years ago Tyler (Kady's big brother) and Christine (Kady's sorority sister) shared a hot night in Mexico when Christine lost her virginity to Tyler, who ran scared afterward never calling or seeing Christine again until they are in the same resort for Kady and Colton's wedding. Understandably Christine is angry, but she's never gotten over Tyler and the chemistry between them is still explosive.  I enjoy a good second chance love story.  My only criticism here was that Christine was so wishy-washy.  One minute she's climbing Tyler like a tree, then the next she's telling him she doesn't want him.

Baiting the Maid of Honor - 3.5 stars

This is a perfect opposites-attract love story.  Julie is a people-pleasing party planner and Reed is a quintessential brooding, dirty-talking, alpha male we've all come to enjoy from Tessa Bailey. Despite their differences, these two have instant chemistry.  Julie doesn't want to be attracted to Reed, but she can't deny that she wants to let go of the good girl for a while and just enjoy what he has to offer. The chemistry jumped right off the page for me, but I needed some more pages/chapters to really buy that these two could live happily ever after following the week's events.

Here we have another opposites-attract love story.  Regan is a hard as nails, ambitious, and very successful.  She's set her sights on hooking up with the best man, Logan, who is the type of man she sees herself with long term.  Unfortunately, Regan and Logan have absolutely nothing in common and most of all, he's set his sights elsewhere.  Brock has made it known that he's interested in Regan but she keeps telling him that his laid back (i.e., lazy according to Regan), rich boy ways are not in her plan.  That doesn't stop them from hooking up multiple times though.  I didn't like Regan, which took this book down a couple of notches for me.  I have no problem with strong heroines who are in charge of their sexuality so that wasn't the issue.  I didn't like Regan because she's using Brock for the better part of this book and she makes no bones about it.  She constantly insults him and makes the fact that he was born into an affluent family on par with him having committed a crime.  And I had no respect for Brock because he let her treat him badly the whole time.  When Regan realizes that 1) Logan and she have nothing in common and 2) Brock isn't as hapless and lazy as she thought he was, then he's suddenly worthy of her affection.  It all works out, but these two characters just didn't sit well with me so it was hard to feel the love.

Perfect end and my favorite of the series.  Logan is a workaholic, CEO who hasn't had a vacation in years since his company has grown exponentially. He's determined to not let his unrelenting workload stop him from standing up at his best friend's wedding,  Sophie (Colton's baby sister) is shy and introverted but she's made a lot of changes of late to step out of her shell so she takes the dare with the other ladies to bag herself a groomsman too.  Logan hasn't seen Sophie since his and Colton's college graduation when she was only about 13 years old or so.  When Logan sees a shapely derriere in a pair of skinny jeans at the hotel desk, he immediately starts having dirty thoughts. The last person he expected to be the owner of that perfect bum was Sophie.  They spend time together in and out of bed over the week and things are great until Sophie finds out Logan made a promise to Colton to babysit her so she wouldn't just hang in her room alone the entire week. I can't find anything I didn't like about this book, except that I would have liked it to be longer.

Lastly, I found out that Logan has 2 brothers who are mentioned briefly here and have their own stories that I plan on reading in the future.