Log in with Facebook
or
Wrong email address or username
Sign up
Already on BookLikes? Log in!
Incorrect verification code
Please, check your email, the code to access your BookLikes blog was sent to you already.
Enter code:
« Back Send
back to top
Search tags: Shadow-and-Bone 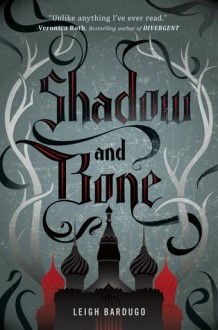 The capital has fallen. The Darkling rules Ravka from his shadow throne

Now the nation's fate rests with a broken Sun Summoner, a disgraced tracker, and the shattered remnants of a once-great magical army.

Deep in an ancient network of tunnels and caverns, a weakened Alina must submit to the dubious protection of the Apparat and the zealots who worship her as a Saint. Yet her plans lie elsewhere, with the hunt for the elusive firebird and the hope that an outlaw prince still survives.

Alina will have to forge new alliances and put aside old rivalries as she and Mal race to find the last of Morozova's amplifiers. But as she begins to unravel the Darkling's secrets, she reveals a past that will forever alter her understanding of the bond they share and the power she wields. The firebird is the one thing that stands between Ravka and destruction--and claiming it could cost Alina the very future she's fighting for.

The third and final book in this trilogy. So with that we know I can’t say all too much or it would be spoiled. One thing I can say, is that I LOVED the Grishavverse , from this series and the Six of Crows that I read previously and I totally get the hype.

That being said…… overall I enjoyed this book.

Plot wise a lot more happened this book than the last and some of it just sort of happened fast, way too fast in some parts. Some things we worked up to for three books and boom and a bang within a half a chapter it happens and before you know it, it’s over. Resolved!  So some pacing and development could have been different.

We do get a couple plot surprises and others I saw somewhat coming.

The Darkling… for me it changed every book… I loved him, than ughhhhhh and then I could have cared less about him.

Mal I never liked and that didn’t change this book, the same goes for Alina.

Really, I cared most about was Nikolai, Genya, and Baghra but also Zoya this book. So really everyone else but the three main people.

The ending was okay, that’s it. Not great or bad, just okay.   And really the only sensible ending it could have had….

Overall I loved the Grisha world and the story for the most part. I also loved everyone but Alina, Mal and the Darkling.

I’m looking forward to see some of my favorite people in The King of Scars that I now finally can read. Hunted across the True Sea, haunted by the lives she took on the Fold, Alina must try to make a life with Mal in an unfamiliar land, all while keeping her identity as the Sun Summoner a secret. But she can't outrun her past or her destiny for long.

The Darkling has emerged from the Shadow Fold with a terrifying new power and a dangerous plan that will test the very boundaries of the natural world. With the help of a notorious privateer, Alina returns to the country she abandoned, determined to fight the forces gathering against Ravka. But as her power grows, Alina slips deeper into the Darkling's game of forbidden magic, and farther away from Mal. Somehow, she will have to choose between her country, her power, and the love she always thought would guide her--or risk losing everything to the oncoming storm.

Siege and Storm is the second book in The Grisha Trilogy by Leigh Bardugo. Book one, Shadow and Bone, is a New York Times bestseller, and book 3, Ruin and Rising, is an Amazon Best Book of the Year and a USA Today bestseller. This title has Common Core connections, and this deluxe paperback edition features bonus materials like an interview with Leigh Bardugo, a bonus short story, "The Tailor," and more.

Now that I sit back and write the review and must decide on a rating and what to say I realize how much of a love- hate relationship I had with this book.

I really, really love the Grishaverse that Bardugo created in this and Six of Crows.

This book while so good and a lot of happened also seemed not much happened, or not much new,. But yet there was a lot of things, new things that happened and yet it gave me a bit of déjà vu from book one.

A lot of time we spend in court, learning new things and getting ready for the big war with the Darkling. At court we see some familiar faces and find out their fate from the veers in last book.

Now to the characters.

I really enjoyed the Darkling for the most part last book and some in this but I come to the point where I’m just” …mmm ugh, yeah no” I don’t totally dislike him but defiantly don’t love him.

Mal. I really wanted to like him , I really did, I tried so hard and after all he gave up and lost for Alina I just wanted to like him, but I can’t ….. I really, really can’t.  I’m not even sure why I dislike him. I just do him and his whiny behavior.

Alina is another one that I can’t stand, she is selfish (she says she isn’t but she totally is),  she is power-hungry and can’t even be honest with herself it seems. The only thing for me, that she had going for her was her humor and snark.

Now the two people I care about the most in this entire series so far.

Genya, we don’t see too much of her but that didn’t matter I still lover her and hope we get more of her next book.

And someone new, Nikolai.  I really enjoyed Nikolai from the very first time we meet him, and hopefully we learn a lot more about him in next book. I love that he has so many layers to him but also felt bad for him at times.

Tolya and Tamar are also high up on my favorite list and hope to see more. While I would love to say the the end was surprising and shocking it really wasn’t. I saw it coming from the half way mark of the book .

Overall, love the magic and world and can’t get enough of the Grisha world.  Love Nikolai and Genya and a few others but really could care less what happens to Mal, Alina and maybe even the Darkling, but I still like him better than Alina.

I have a hard time rating this, but I think I go with 4 . I had some dislikes, yes but overall I still really enjoyed it.

Surrounded by enemies, the once-great nation of Ravka has been torn in two by the Shadow Fold, a swath of near impenetrable darkness crawling with monsters who feast on human flesh. Now its fate may rest on the shoulders of one lonely refugee.

Alina Starkov has never been good at anything. But when her regiment is attacked on the Fold and her best friend is brutally injured, Alina reveals a dormant power that saves his life—a power that could be the key to setting her war-ravaged country free. Wrenched from everything she knows, Alina is whisked away to the royal court to be trained as a member of the Grisha, the magical elite led by the mysterious Darkling.

Yet nothing in this lavish world is what it seems. With darkness looming and an entire kingdom depending on her untamed power, Alina will have to confront the secrets of the Grisha . . . and the secrets of her heart.

I read and loved the Six od Crows Duology a couple years back and I knew I would have to read these books. I just loved the world and the characters she created. That was no different with this book. Of course we get more of the world building and the magic system in this book since it was before Six of Crows and the start. I really enjoyed the flow of this book it was a fast but fun and entertaining read and super easy to follow. The pacing was just right and not too fast or too slow. Though, of course there is always something we want more of, and there were a few situations I would have loved a bit more. There were a few surprising twist and turns but nothing too shocking and nothing I didn’t really see coming, but even so I enjoyed it very much. Alina, I enjoyed for the most part a lot, she had snark and humor but also serious moment as well as self-pity. There were a few eye rolls on my part but overall I really enjoyed her. Mal, hmmmm I’m a bit indifferent towards him and not sure yet how I really feel about how it all went down. Most I liked but other things, like I said I wasn’t sure and it almost felt a bit forced. But I will see how it goes on and develops. The Darkling, I’m super conflicted when it comes to him, he is the bad boy and I think is the villain, but to be honest I’m not sure. I like him and I don’t like him…..or more how is going about… maybe …. I don’t know…. I need to read more to fully judge the whole situation with all of them lol. One of my favorite was Genya though, I wish we had more of her and I hope we get more of her in the future books. Overall, I really enjoyed and of course I loved the world of the Grisha, I loved learning more about it.

I am a bit nervous about the next book, of course we know that not all is good and well and that s&it will hit the fan once more but I’m also excited to see what will happen next. I rate this book 4★, just because some things were way too predictable.