Log in with Facebook
or
Wrong email address or username
Sign up
Already on BookLikes? Log in!
Incorrect verification code
Please, check your email, the code to access your BookLikes blog was sent to you already.
Enter code:
« Back Send
back to top
Search tags: scarlet-witch

Still not crazy about these huge events.   They usually try to shoehorn something in or are too bombastic for me, or... something.  I just don't tend to like them. I'll take a tightly written smaller arc in an ongoing title over events like this any day of the week.

But Vision and Rocket, so, yeah, I was gonna see this through somehow. 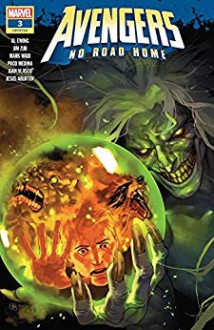 So to be fair, I've read four and skimmed through five at a store by now.  I just don't feel the need to go on: there's not enough Rocket and Vision, aka the reasons I bought this in the first place. I may eventually go back and read it, but right now I don't have the patience for this.   Not a bad storyline, but... 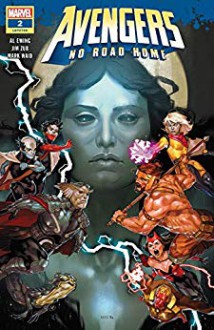 She's brought eternal night to all the Earth - all the worlds, in fact.   And Voyager, from the previous comic-a-week event, must gather together Avengers - and at least one Guardian of the Galaxy - to stop her.

Except now they seem to be scattered - or maybe in hell? - and apparently living out their most horrible scenarios.   Mother of Night is shattered, her soul scattered across the universe and she assures them she is at her weakest.   She still wipes them out with barely any effort, not to mention her children, all with the fraction of her power but still formidable opponents.

I peeked at the next issue, and it seems to be, yay, Rocket centered.   The first issue was set up, and this issue was narrated by Hawkeye, Clint Barton version.  The next one seems to go over what happens to Rocket.   Still, it's a Vision and Rocket maxi-series, so I'm pleased to be reading this.   In fact, a new one will come out my birthday week, so yay! 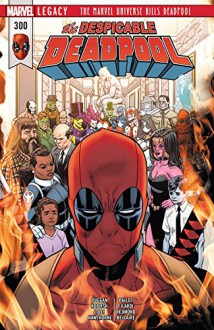 They went all out, setting up the next series perfectly.    This Deadpool - and those before - ended up getting bogged down by a lot of baggage.   It was harder to balance the emotional aspect with the off-the-walls manic humor and social statements, and so they found a way out.

I'm sure this will come back later, but for now...

I say perfect.   But I'd think that there would be a way to Google things, but I suspect someone will take care of that, or it will be explained later on?

So much vomit.   Content warning for y'all.   Usually I stop reading at vomit, but it got funnier and funnier, and just yes.

ETA: Cap played a huge part in this and I'm still one-half starring everything with Cap in it until Marvel apologizes for the gas lighting about Hydra never being nazis and reverses the decision on that. 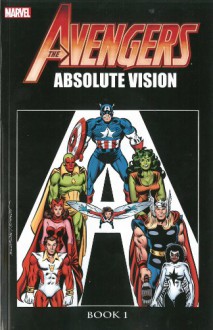 I mean, Absolute Vision?   And I'd heard not to expect everything to be Vision.   But there were completely unrelated stories that meant Vision didn't show up until about a hundred pages in, then went away, then was all but gone for a while.   (He was on page, but not functioning.)   I understand why this is Absolute Vision Book 1; it's essential to setting up the second one.   I know this because I've read notes in other Avengers comics that let me know what happened, and a couple other books blatantly referenced this book and volume two.

I know what's happening here.   I know what's going to happen.   But I still want to finish this badly.   (Both volumes, I mean. I'm a little into the second, and I'm loving it!)  I wanted more Vision.  I wanted much more Vision. I do love what they're setting up, although maybe I love it because I know what's coming up soon.   Reading old comics when you've read newer comics can be odd; you know what's happened, but not the details.  You know whether or not the characters are alive, or active, or dead and then resurrected.   You can see how this storyline affected them years, even decades, down the line.

And this is a fun comic.   It's old-fashioned as far as both art and dialogue - and any of the writing go.  I've got to admit I am fond of the newer stuff; it's slicker looking and there's not so much exposition in general.   As the world gets more left-leaning in ways, I've found that comics are really trying hard to be more representative, and part of that is a left-leaning quality.   (I'm liberal, and progressive, but also a Zionist, so I step off the beaten path on that.  I'm also struggling with this as I feel abandoned by both the left and the right, and it's influencing a lot of how I view comics, especially those that are political.)  But the point is that I'm a fan of a lot of the politics in newer comics, especially as comics have had a problem with racism and sexism in the past.   They were products of their times, but I don't see this as a reason not to criticism them.  I think that a discussion about why the times were this way is appropriate, and even condemnation of that time thinking these things were okay, is appropriate.   'A product of its time' is normally a pass, much like 'boys will be boys', but a product of it's time doesn't have to be.   It can be used as 'yes it, is, but let's look at why, why it was wrong, and try to make it better.'

Anyway, older comics can get weird for me for a whole host of reasons.   This didn't as much as many: they didn't deal with Jan's history with Hank Pym that much, but I felt both held their own.   Even though Jan apologized first, she was leading the project, and Hank didn't hold it against her, but instead admitted to his own faults and complimented her.   (And look, it's an old-timey comic.   Jan apologizing first had me cringing a little, wondering if she'd be passively-aggressively held to account for all the weirdness.   She was not.)   Jan was just as flirty as Star-Fox, and neither were held to account.   In fact, there was snark about them being equally flirty but in a way that seemed to be equally snarky at them both.   Neither one was shamed for it in any real way.   When people goggled at She-Hulk, she cheerfully said she was taking it as a reason to goggle right back at them.   (It was her skin color - green, of course - and not her boobs that had them doing double takes.)   Scarlet Witch and Vision's relationship was just done beautifully: they both care a great deal for each other, and while she spends a lot of time at his bedside, it's because he's unwell for a while.   (And while I believe it's to an unhealthy degree, as in she doesn't even eat, I understand why after her hellish, worried life.   She clings to him.   It's not a scenario where she gives up everything and he just takes and takes either.   It's later, in West Coast Avengers, that you find that he doesn't need to sleep, but stays beside her all night because it brings her peace when she hasn't had much in her life.  In other words: I think it would be problematic for a character to give up everything in this unhealthy way, particularly if their parter weren't giving back.   They give up, and in a way that feels fairly equal, so it didn't feel super creepy to me.)

In other words: I just didn't see any of the cringe-worthy sexism.   Yes, Jan strips down to a bikini on a boat to work on her tan.   But to be fair, when she mentions it's for the tan, Star-Fox starts stripping down, too.   And she's not posed in a stick out her boobs way, but rather more naturally.

Anyway, one star knocked off for the obsession with the weird mouths and poses that have you looking up people's noses.   Two stars knocked off, because why did Absolute Vision Book 1 have so little Vision?   Seriously, a lot could have been taken out without messing up the setup.   Still, it's a good read and I'll probably reread at least the Vision parts.