Log in with Facebook
or
Wrong email address or username
Sign up
Already on BookLikes? Log in!
Incorrect verification code
Please, check your email, the code to access your BookLikes blog was sent to you already.
Enter code:
« Back Send
back to top
Search tags: Julia-London Sloane goes into Galen's pub daily.  He has the best WI-FI and cell service.  The only way she can stay in touch with her life in the States.  She tells him her ideas to improve his pub while she is there.  He very much hates that she has all these ideas.  He is annoyed by these daily conversations.

Galen is trying to make it work.  He has the pub that was his Grandfather's.  His family gives him little to no help and thinks he is crazy for trying.  He left his job as a solicitor to make this happen.  Now he has a crazy American woman offering him a deal.

This story was so fun to read.  There was a lot of humor.  I enjoyed the banter, and the heat was literally of the charts HOT!  I found myself rooting for this couple early on.  They really were the perfect set of opposites attract.  I give this a 4/5 Kitty's Paws UP!

***This copy was given in exchange for an honest review, by Netgalley and its publishers. 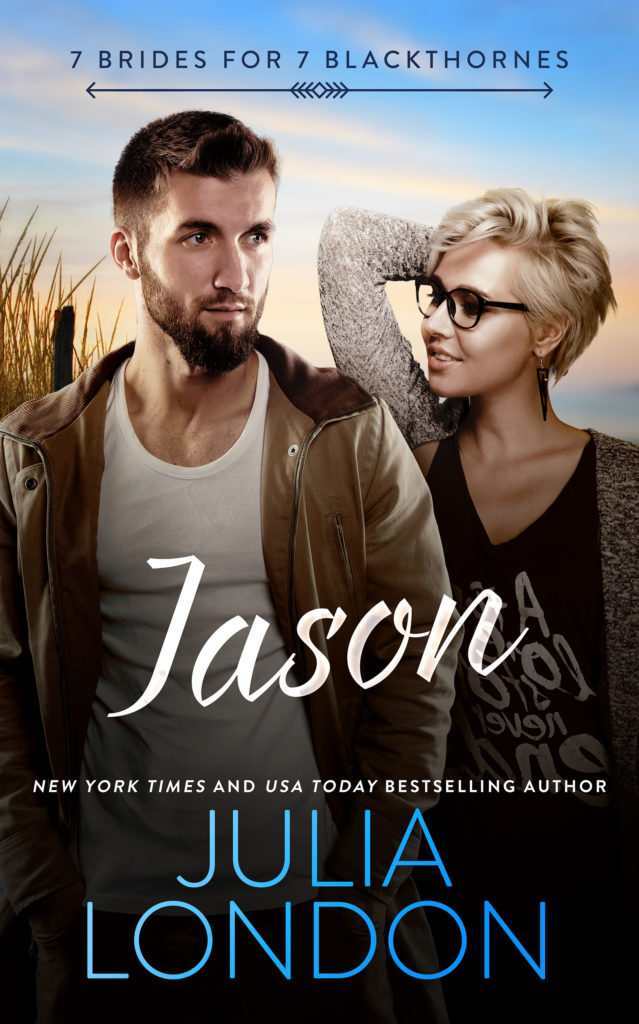 Jason Blackthorne wants to make films. As head of Blackthorne Entertainment, he’s finally getting his break – a gritty cop drama filmed near the family compound. He has a lot riding on the success of the series, both with family and the industry. He doesn’t have time to notice how pretty or talented his assistant is. He just needs her to jump when he says jump.
Mallory Price has tried acting, but what she really wants is to be behind the camera. She is a storyteller at heart and she knows she could direct a killer show. She has great ideas, and though Jason seems to hear her, he never sees her as anything but a Girl Friday.
But when an accident on set puts him flat on his back, and a mercurial director goes missing, Mallory steps in. Long nights at work and equal footing create sparks between Jason and Mallory. But when Jason is on his feet once again, and the director returns, has anything really changed between them? Or was it all just a dream?
Meet the Blackthorne men, each one as hot, fast, and smooth as the whisky that built the family fortune, and yachts and race cars that bear their name. From proud Scottish stock, Blackthornes never lose. But, one by one, the seven sexy men in this family are about to risk everything when they fall for strong and beautiful women who test their mettle in life…and love.

Check out every book in the series! 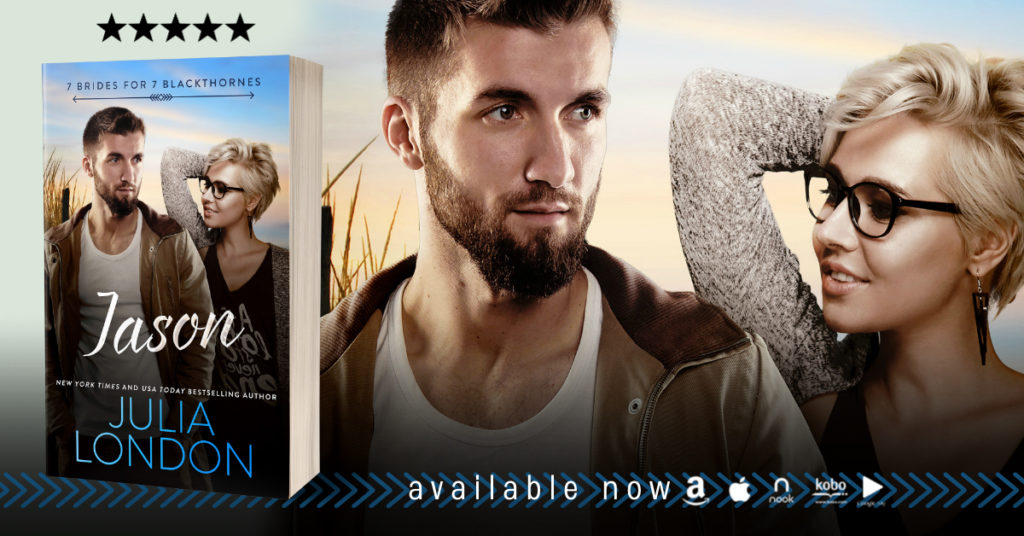 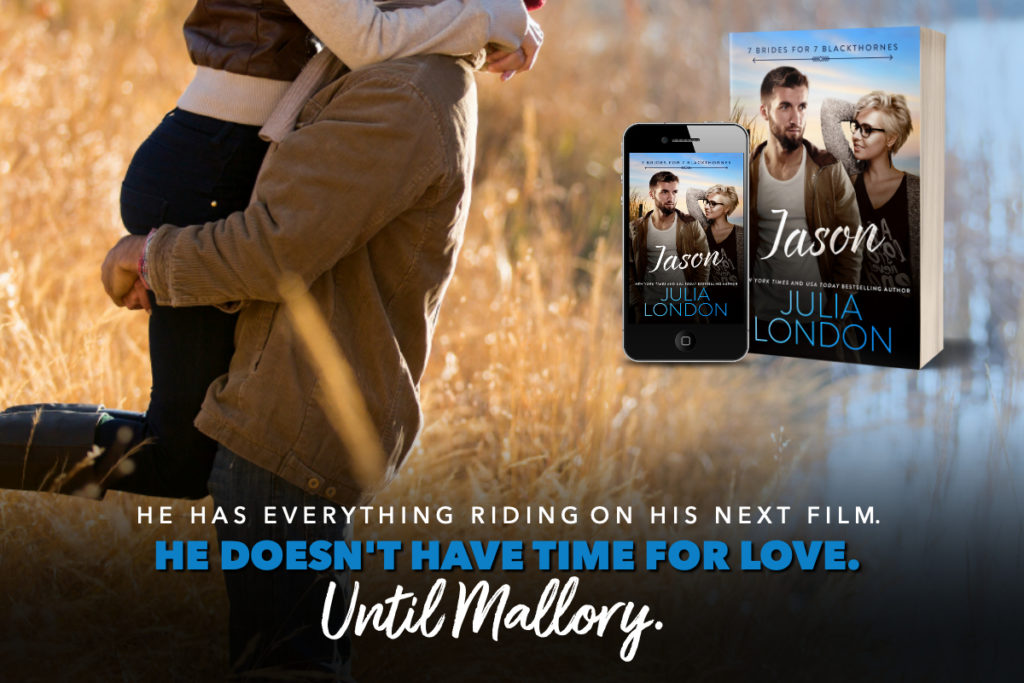 Julia London is the New York Times, USA Today, and Publisher's Weekly bestselling author of more than thirty novels, including the popular Secrets of Hadley Green series, the Cabot Sisters series and The Highland Grooms historical romance series. She also wrote the Pine River and the Lake Haven contemporary romance series. She is a six time finalist for the prestigious RITA Award for excellence in romantic fiction, and RT Bookclub award recipient for Best Historical Romance for Dangerous Gentleman. She lives in Austin, Texas. LIGHTS, CAMERA, ACTION, spells trouble for two ambitious filmmakers. Jason and Mallory set off sparks behind the scenes. He has much the family name riding on his latest venture. She wants the chance to get her feet wet. When behind the scenes drama gives way to an unpredictable attraction, it's anyone's guess the way things will go. Watch this slow flame become an inferno. London heats it up with an entertaining, firecracker that proves itself hard to resist. Aulay Mackenzie has only ever felt himself when at sea. In an effort to save his family’s shipping business, Aulay decides to make his first commissioned trip, taking on cargo for another, despite his family’s concerns over the risk. Barely away from port, Aulay comes across a distressed ship and offers assistance to its beautiful passenger, Ms. Lottie Livingstone.

Lottie’s clan is at the end of its rope, hoping to sell their illegal whiskey overseas, when their ship is attacked, leaving her father severely injured. Lottie’s plan to commandeer Aulay’s vessel goes smoothly, despite her attraction to its captain. However, once things start unraveling, Lottie isn’t sure she should continue with her plans.

Devil in Tartan is an enjoyable highland adventure. Taking place mostly at sea, Lottie and Aulay are forced to spend time together in confided quarters, allowing their mutual attraction to boil over and develop into a friendship. However, it’s not sunshine and roses. Aulay stands to lose everything due to Lottie’s scheme, and Lottie bears the weight of saving her entire clan from losing their homes and land. Aulay’s constant struggle between his duty, family, and his feelings for Lottie create incredible emotional turmoil and conflict.

Aulay and Lottie are both lonely souls, doing what they can for their families. But whereas Lottie sacrifices herself to keep her family together, Aulay runs away from his, not feeling worthy under his father’s roof. Yet the pair, drawn by a powerful attraction, have the time to see the real individuals beneath the layers of protective outer shell that each has built to keep themselves emotionally distant. They grow close and fall in love, even though Aulay’s hurt overshadows the love for a while. Luckily Lottie doesn’t grow bitter, and remains open and caring, allow their reunion to proceed and love to grow, even after the damage she does.

Overall, I enjoyed Devil in Tartan. The romance and story progress and a slow and steady pace, allowing time for both self-discovery and a deeper mutual bond.

I am rather sorry that I didn't particularly enjoy this installment of the series. And while there are good parts, I have quite a bit of issue with others.


This is the fourth in a series I have come to enjoy and like. I love Julia London's writing style.
However, sometimes the brogue was a bit distracting. I am not sure if I am ever going to like people writing out accents in dialogues. For me, it's about readability rather than authenticity. Also, I keep thinking if they all speak to the same way, why highlight it?
I should mention that if I would have listened to the audiobook, I would have loved the fact that the dialogues were written in Scottish brogue.

The storyline was entertaining. I enjoyed the ups and downs of this adventure. Maybe we should call it a misadventure?
Now the romance is a whole other cattle of fish. I mean, it's not really terrible I guess. But I just didn't get where they were coming from. I get there was sexual attraction. But how on earth did this shift from it to the big L?
I just don't get it. It's way to insta for me. It just doesn't work for me.
Then add to it that some of it was just too generic and we have a big no-no for me.

At least I felt like that until Auley declared his feelings. And let's just say someone might have or might not have been all gooey. He had me at my inner sea turned over ...

The character building left me divided. I love the supporting cast. Most of them anyway. I am not a huge fan of the villains. They feel a bit generic. The rest of the support cast is vivid, unique and interesting. A great backdrop for the MCs
I adore Auley. I loved him from the get-go. I could relate to him ( hello! middle child over here!)
I got his worries, his thought process, I got it all except how or why he fell for Lottie. Except for the superficial that is.
Lottie, well, let's just say she grew on me. I didn't care much for her for most of the book. I found her really immature and fullish most of it. I guess she is quite young, but some of the things she did were annoyingly childish.
Then I found the way Aulay saw her didn't really correlate with the way I see her. And somehow that made it worse, it felt inconsistent. She did towards the end grow on me, not as much as her merry band or Aulay, but still enough.