Log in with Facebook
or
Wrong email address or username
Sign up
Already on BookLikes? Log in!
Incorrect verification code
Please, check your email, the code to access your BookLikes blog was sent to you already.
Enter code:
« Back Send
back to top
Search tags: Complicated What Happened in Vegas by Mika Jolie


Every dark cloud has a silver lining and I've found mine in Mika Jolie. Whether by heart or through humor she can always make me smile. When the heart comes out the gloves come off and the temptation gets explosive. Griff and Chelsea are a cute combination of sweet and sassy that proves itself a welcome edition to my favorites collection. 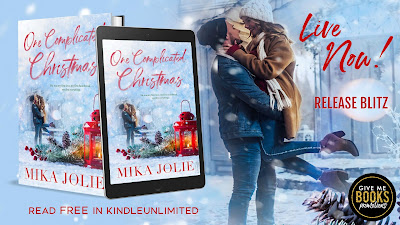 Title: One Complicated Christmas
Author: Mika Jolie
Genre: Contemporary Holiday Romance
Release Date: November 21, 2019
Blurb
What’s a girl to do when she needs to bury the memories of her past?
Apparently, book a room at a cozy Vermont inn for Christmas…as if that’s going to fix years of pining for the one that got away. It doesn’t matter. This holiday getaway is exactly what the doctor ordered. I’m ready to close that heartbreaking chapter in my life for good and start the new year with a bang.
It should be easy.
Except there’s one problem—Joe Parker—with that killer smile and those drown-in-me brown eyes. The man who was supposed to be my forever, but instead left my heart shattered and in disarray.
He’s here. In this wintry hamlet. Daring me to risk everything for him. Again.
I came to this small town looking to leave the past behind me, not get reacquainted with an old flame. And yet, one kiss, and I’m consumed by feelings—heart, mind, and soul. He still makes me tingle in all the right places.
Denial is a powerful tool, but how long can I fight falling for him all over again?
Can I trust him enough to give us another shot?
Fans of Jill Shalvis and Nora Roberts will be swept away by One Complicated Christmas, a second-chance standalone holiday romance in a small town, set with mistletoe lurking around every corner. Grab a glass of spiked eggnog and enjoy.
ADD TO GOODREADS

One Complicated Christmas by Mika Jolie
My rating: 4 of 5 stars

Alexandra AKA "Sasha" has come to Yeti, Vermont, a small town with snow and charm for her Christmas holiday. Her parents went on a cruise, and with no one special in her life she wants to get through the holiday without mishap. Not even knowing she would face her past.

Joe is surprised to see the one that got away, staying at his sister's. He is even more pleased when she is tasked to learn where he teaches people how to ski. With fate taking them both for a ride - he means to fix the past and right some wrongs. Now if Sasha will let him, it may be a holiday come true.

I am a big fan of this trope. The second chance is very heartwarming when done right. This story charms, and brings on the heat. I love the characters and how much of a delight some surprising secondary characters became. I sure hope we see this family again.


***This ARC copy was given in exchange for an honest review only.

Author Bio
Mika Jolie lives in New Jersey with her Happy Chaos—her husband and their energizer bunnies. She’s a lover of words, wonder, an old-fashioned, and the whimsical delights of everyday living. When she’s not writing swoon-worthy, sexy relatable romance, you can find her on a hiking adventure, beachin’ it at the Jersey shore, apple, blueberry picking, or whatever her three men can conjure up.
She loves to hear from readers. Connect with Mika on BookBub, her reader group Mika Jolie’s Wildflowers, Facebook, Amazon, Instagram, Goodreads, and BookandMainBites
Author Links
BOOKBUB
FACEBOOK
FACEBOOK GROUP
AMAZON
INSTAGRAM
BOOK+MAIN BITES
GOODREADS Alexandra AKA "Sasha" has come to Yeti, Vermont, a small town with snow and charm for her Christmas holiday.  Her parents went on a cruise, and with no one special in her life she wants to get through the holiday without mishap.  Not even knowing she would face her past.

Joe is surprised to see the one that got away, staying at his sister's.  He is even more pleased when she is tasked to learn where he teaches people how to ski.  With fate taking them both for a ride - he means to fix the past and right some wrongs.  Now if Sasha will let him, it may be a holiday come true.

I am a big fan of this trope.  The second chance is very heartwarming when done right.  This story charms, and brings on the heat.  I love the characters and how much of a delight some surprising secondary characters became.  I sure hope we see this family again.  I give this read a 4/5 Kitty's Paws UP! This was a really enjoyable read and we loved it ! The title for this story really fits but, I think that this couple wasted a lot of time without each other because if they had just communicated with the other parties involved things may have been different and then maybe not but, in doing so they were creating a whole lot of other problems for them and a whole a lot of distrust..

One of the things we loved most about this couple's story is that the challenges that a parent or parents can go through when their child is different and born with disabilities.Even though this is just a book of fiction I am quite sure a lot of parents have been in several similar situations depicted in this story and how small towns can be and just how cruel and mean people can be .Kaler and his daughter never deserved the towns scorn they were shown and its shame that their prejudices got in they way of what could have been a friendship filled with love and kindness. The story made us feel that it was all the more real and that you were living in the here and now."We just loved that about this story !"


I fell in love with Kaler's character right from the onset of the story as he was just an amazing parent and just loved his little girl with everything he had and not only that he put her needs first especially when he was making decisions that would effect their future and he was always thinking of her first and foremost. "Can you say heart melting?"

"We loved the sexy as sin single dad !"

Jenna the friend and school teacher we found to be totally awesome as she had this vibrant and amazing personality who tried to enjoy all life's little gifts and she has this amazing connection with Kaler's little girl Willow."We loved Willow she was such a precious sweetheart that brought sunshine into all their lives."

Kaler and Jenna's chemistry was super hot and by the way they could keep their hands off each other just proved it . lol

We loved this sweet romance between Kaler and Jenna and the rocky road they had to travel and that it was filled with ton of scorn,and tons of town gossip and a whole lot of town drama.We have to say that they busy bodies made us laugh a time or to but, overall the story was emotional and heartfelt and we loved it from beginning to end. Second chances are possible and if your brave and persistent enough to go after what you want you might just attained the life you should have had all along....."We are rooting for you Kaler!"

A recommended read to all !