Log in with Facebook
or
Wrong email address or username
Sign up
Already on BookLikes? Log in!
Incorrect verification code
Please, check your email, the code to access your BookLikes blog was sent to you already.
Enter code:
« Back Send
back to top
Search tags: Activism

A national animal rights day (#NARD) 2022 event in Valletta in front of the Triton Fountain was on Sunday at 5pm. The event has been organised by Animal Liberation Malta (ALM) in collaboration with the international NGO "Our Planet. Theirs Too". "So privileged to share #inspiration with you ALL special souls! This LIVE video was a capture of the #Malta #event, find me at the stage a few moment before the address. ❤

The Event was organized by the Maltese NGO Animal Liberation Malta.

ALM's mission is to raise awareness and take action against all forms of animal abuse. I'm cognizant of the fact that I don't read enough books by women of color and that I read very few works of poetry. I decided to kill two birds with one stone by reading Claudia Rankine's Citizen: An American Lyric. (Also, it's National Poetry Month so it was a no-brainer.) This book is especially relevant right now with the state of our world being what it is: a shambles. Citizen is essentially Claudia's exploration of what it is to be a black woman living in America as told through poetic verse. It is beautiful, tender, terrible, tragic, and real. She doesn't shy away from such topics as police brutality or the prevalence of feeling like an outsider. This book is a personal revelation and a public admonishment all rolled into one neat package Coupled with her verses are historical quotes and pencil drawn (I think?) artwork. What better way to begin your foray into poetry than by reading a book that challenges the status quo and speaks from the heart? If you'd like to maybe see the world through a different set of eyes Citizen is your golden ticket with many stops along the way. 9/10

I made a note of this quote on page 89 to give you an idea of just how powerful her words are:

Those years of and before me and my brothers, the years of passage, plantation, migration, of Jim Crow segregation, of poverty, inner cities, profiling, of one in three, two jobs, boy, hey boy, each a felony, accumulate into the hours inside our lives where we are all caught hanging, the rope inside us, the tree inside us, its roots our limbs, a throat sliced through and where we open our mouth to speak, blossoms, o blossoms, no place coming out, brother, dear brother, that kind of blue.

What's Up Next: From Here to Eternity: Traveling the World to Find the Good Death by Caitlin Doughty 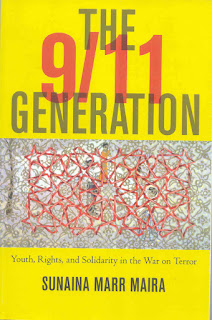 It is a theme I love to treat this one.
I had three correspondents in NYC and the day of 9/11 I lived a real nightmare because I didn't still know if they were all safe.

That terrorist attack was for all of us a sort of before and after.

We understood someone launched an unclear war with hidden soldiers: phantom ones ready to sacrifice their lives for destroying our Western civilization and many poor innocent human beings. A dirty war.
It was more than clear that our old world would have changed forever. Like also our destiny.

This one is a book that wants to let us discover the other face of that post-terrorist attack; the most hidden part of it, the one no one speak about too much: what happened in the immediate in the Muslim communities located in the USA and interacting with the rest of people mainly white ones.
We speak of South Asians, Arabs and Afghan Americans.
The discrimination they lived because of this terrorist attack and diffidence they experienced but also their fight for being considered well and not included in the spiral of diffidence created and wanted by terrorists.
What did they start to be? Activists, rising their voices against discrimination, fighting for human rights of every sorta.

The 9/11 Generation Youth, Rights, and Solidarity in the War on Terror  by Sunaina Marr Maira published recently by New York University Press starts the trip in the democratic California in a place like the Silicon Valley for brains arriving from every part of the world.

The Silicon Valley and San Jose are places populated by open minded minds but where, young people from the ethnic groups said before experienced psychological violence, verbal violence, after 9/11 in particular if they were undocumented citizens just for the fact of being of the same ethnic group or religion of the terrorists. And sometimes not just verbal.

The answer the creation of an activist movement in grade to speak internally and externally at the USA.
Why this?

Because young people understood first of all that it was necessary  sharing a best knowledge of their communities, their religion and their customs in the USA and with the other Americans, although they were ready to fight and promote their activism outside as well.

It's a very interesting book. It speaks at the mind and heart of everyone and again this one another book reporting of communities and ethnic groups fighting in the USA for their Rights and the rights of an entire, wounded humanity devastated by hate, diffidence, racism and persecution.


I thank NYU Press for the physical copy of this book.