Log in with Facebook
or
Wrong email address or username
Sign up
Already on BookLikes? Log in!
Incorrect verification code
Please, check your email, the code to access your BookLikes blog was sent to you already.
Enter code:
« Back Send
back to top
Search tags: samantha-cole 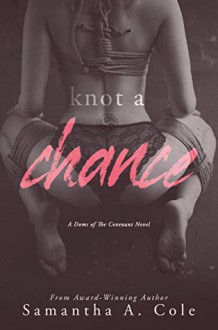 This book is #8.5 in the Trident Security series.  This book can be read as a standalone novel.  This does not mean it should.  In my own humble opinion if you miss out on this amazing series, it cheats you of the great characters and deeply fulfilling stories.

Ian feels torn when his parents need him, (and technically the whole team) when his wife is due any time.  His father calls and tells him his mother is missing and there is a clock ticking.  Can he really have the best of both worlds?

Angie knows she can't hold her husband back on something this serious.  She also knew he would get home as soon as he could and she has plenty of help at home.  So she sends him to his mom and dad.

Happy to read any mystery that the "Sexy-Six Pack" have to solve.  They always solve it while a truly fabulous love story is weaved in, and this one is no different.  It is just a shorter, sweeter version that takes us to see what is going on in their lives.  I loved it.  I really love how I always feel gratified at the compelling books that make up this great series.  I give this a 5/5 Kitty's Paws UP! This is book #2, in the Trident Security: Omega Team series.  This can be read as a standalone novel.  For reader to completely understand, I would recommend readers read in the order intended.

Darius is undercover with a hellish drug lord, when in comes more women for his human trafficking ring.  This one he recognizes.  She is someone who can blow his cover too.

Princess Tahira has no idea where she and her cousins have been taken to.  She must escape or fall victim to the worst sort of crime.  Good thing a hero is there in the shadows.

Such a dark and stormy knight!  Sorry did not mean to be flip.  This read is actually quite difficult and a warning to the readers is in order.  If you have been following along with this incredible series you will not want to miss this one.  You have danger, suspense, heat, tension, friendship, and more.  I was happily to find these characters are so deep there is so much development to them.  I give this a 4/5 Kitty's Paws UP! This is book #2.7, in The Collective Season Two series.  This novel can be read as a standalone.  For more information about the series, and to avoid spoilers, I recommend reading these in order.

Carson moved to San Francisco to take a position that furthered his career as a doctor.  The love of his life decided to make the move with him there.  Only they never see each other anymore.

Quinn is not sure he wants to stay in his current job.  He moved here with Carson to be with the man who he loved beyond all else.  Their careers are so demanding, that it seems they have no time together lately.

While this series has its own thread weaving through all the books, this one turns up the heat and keeps it blasting.  This author is an automatic buy for me and this story does not disappoint.  Thrilling, and full of suspense, this is a story that will leave you breathless and wanting more.  I give this a 3/5 Kitty's Paws UP!

Love Under Siege will only be available for a limited time, grab your copy now before it's gone forever!

Maryann Jordan has been a devoted romance reader since the late 1970’s! After a career in adolescent counseling, she is thrilled to be a full-time romance author, writing military romantic suspense and small-town romance. With one of her cats usually perched next to her laptop, she keeps her readers entertained with tales of sweet alphas and the independent heroines that catch their eyes. Now a USA Today Bestselling Author, she always promises a Happily Ever After. www.maryannjordanauthor.com

Caitlyn O'Leary is an avid reader, and considers herself a fan first and an author second. She reads a wide variety of genres, but finds herself going back to happily-ever-afters. Getting a chance to write, after years in corporate America, is a dream come true. She hopes her stories provide the kind of entertainment and escape she has found from some of her favorite authors. www.caitlynoleary.com

Abbie Zanders loves to read and write romance in all forms; she is quite obsessive, really. Her ultimate fantasy is to spend all of her free time doing both, preferably in a secluded mountain cabin overlooking a pristine lake, though a private beach on a lush tropical island works, too. Sharing her work with others of similar mind is a dream come true. She promises her readers two things: no cliffhangers, and there will always be a happy ending. Beyond that, you never know… https://abbiezandersromance.com

Samantha A. Cole is a retired policewoman and former paramedic, who is thrilled to add award-winning author to her list of exciting careers. After being gifted with a stack of romance novels from her grandmother, her love affair with the genre began in her teens. Many years later, she discovered her love for writing stories was just as strong. Taking her life experiences and training, she strives to find the perfect mix of suspense and romance for her readers to enjoy. www.samanthacoleauthor.com

PJ Fiala has toyed with many careers in her life, looking for that perfect fit. Finally, when her love for writing took root, a match was made. A lifelong reader of romance novels of all genres, she still reads her favorite authors and enjoys finding new authors to entertain her. An avid biker, she plots most of her stories while riding and enjoying new adventures with her husband, then bringing those adventures to her stories filled with steamy passion and love, and they always end with a happily ever after, 'cause who doesn’t love that? www.pjfiala.com

KaLyn Cooper writes military romantic suspense, often based in facts ripped from the headlines. Twenty-seven years as a military wife has shown her the world and the men and women who protect it every day. Thirty years in PR taught her fact can be stranger than fiction, but leaves it up to the reader to separate truth from imagination. All of her heroes, and many of her heroines, are active duty and veterans, all who find a happy ending. www.KaLynCooper.com

Lindsay Cross is the award-winning author of the Men of Mercy series. She is the fun loving mom of two beautiful daughters and one precocious Great Dane. Lindsay is happily married to the man of her dreams – a soldier and veteran. During one of her husband’s deployments from home, writing became her escape and motivation. An avid reader since childhood, reading and writing is in her blood. After years of reading, she discovered her true passion – writing. Her alpha military men are damaged, drop-dead gorgeous and determined to win the heart of the woman of their dreams. www.lindsaycross.com

MJ Nightingale is the best-selling author of The Bounty Hunters: The Marino Bros. She is an avid reader of all things romantic and suspenseful. She is married to a wonderful loving husband and they have two fun and fabulous sons. Going on road trips with her family provide the settings to many of her books. Her leading men are bounty hunters, detectives or ex-military--but all are alphas with heart and heat. And the women are strong--the perfect match to all that testosterone. Her books will have you page-turning late into the night. She surely brings the heat with stories that sizzle!